The Paralyzed Veterans of America Racing team was out in full force during Presidents’ Day weekend.

Arizona’s Capitol building in Phoenix, Ariz., saw a tight race this weekend, but it had nothing to do with politics. It came down to going to the video tape to see who won during the criterium of the 28th Annual Valley of The Sun bike race.

The Paralyzed Veterans of America team (PVA Racing) have attended the Valley of the Sun race for the last 15-plus years and looked to take home gold this year in the criterium and they came extremely close to taking gold home. In fact, the race came down to two handcyclists in a photo finish. PVA Racing’s Ryan Pinney came up a wheel short to retired U.S. Army Staff Sgt. Omar Duran (who raced as an independent), as they both ended with a time of 23 minutes and 1 second in the seven laps, they took around the course.

After the race, the 42-year-old Duran, who made his first trip ever from Clearwater, Fla., to the West Coast, was delighted with the win. Although the race was so close, he didn’t know he won until long after the event ended.

“I was looking down during the whole final sprint, and when I saw the white strip go by, I picked up [my head] and I saw that there was only one rider beside me and that was Ryan,” Duran says.

A Phoenix resident and 2020 U.S. Paralympics National Cycling team member, Pinney did nicely this weekend overall for PVA Racing, as he not only took home silver in the criterium, but he also finished first in the Saturday’s time trials.

The handcycling criterium course involved racing for a half hour, getting in as many laps as possible (in this case seven) around the capital complex of Phoenix in a figure-eight shape. The race started on West Jefferson street going west toward South 15th Ave where they traveled south. The riders turned right on West Madison street to go east towards a northbound South 16th Ave. The loop ended at the starting line by finishing on West Jefferson street.

PVA Racing showed up with nine of the 24 registered riders, some advanced competitors and some new to the circuit.

One member making his first trip to Phoenix in his six-year handcycling career is handcyclist and retired Marine Corps. Sgt. Solomon Revils. Revils, 62, is no stranger to heavy machinery, as he worked in the Marine Corps as an aviation repair technician. He made the trip to Phoenix from his home in Chesapeake, Va., on a dare from fellow team member and retired U.S. Army Staff Sgt. Manny Herrera.

“Manny has been talking trash to me for the last three years about coming out here, and I have been making excuses,” Revils says. “I took the dare and he wasn’t lying about how cool it is.”

Though Revils admits that he isn’t the fastest guy on the track, that is not why he came to Phoenix to compete.

“The benefits of being part of this organization is that it brings us all together, and it’s us military guys,” Revils says. “It gives us a camaraderie, support and everything kind of meshes together from what we have been trained from being [in the] military.”

Herrera says the team trained extensively for the race.

“We were in Brooksville, Florida, about two weeks ago, and did a high-performance training camp there, and we did it with international athletes who come to [our team’s facility] to train there,” he says. “Prior to that, I was here in Glendale, Ariz., where I live, and I went up to South Mountain and used the San Juan trail to get ready for the event.”

PVA Director of Racing and Fitness Jody Shiflett, 54, thought the team had a good showing.

“It went well. We brought some people that haven’t done this race before, and they learned a lot while they were here,” says the 54-year-old Shiflett, “It’s just important to get some experience that is handed down to the new riders.”

Next up for PVA Racing is the April 22-26 Redlands Bicycle Classic in Redlands, Calif.,

For more on the PVA Racing team, visit https://pva.org/adaptive-sports/handcycling/. 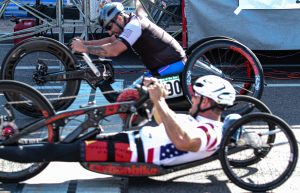