For years, Larry Chrislip’s friends at the Paralyzed Veterans of America Lone Star Chapter told him how much fun they had at the National Veterans Wheelchair Games (NVWG).

This year, at age 76, the Army veteran finally joined them Friday at the 39th NVWG in Louisville, Ky.

“A lot of people were talking, saying, ‘I’ve been there so many times,’ and I thought I better start going if I’m going to rack up in years,” said Chrislip, who served from 1967-69 as a military policeman and developed multiple sclerosis in 1985.

Motoring around legendary Churchill Downs horse track in his power wheelchair for the first time and answering Kentucky trivia questions at the trivia (motor rally) competition, the gray-haired Chrislip had a blast during the Games’ opening morning.

During trivia (motor rally), athletes traveled to 10 stations with a volunteer escort across Churchill Downs, stopping at tables at various points throughout the facility to answer trivia questions about read to them by volunteers. Athletes had to write down answers to each one and questions took different forms. Some were multiple choice. Others were true/false, and a few they had to name a certain establishment or place.

Questions had to be answered and recorded at the checkpoint and there was an adequate time limit to give an answer.

Participants started inside Churchill Downs, took an elevator up to high above the track for one trivia question and had a cool overhead view of the fabled horse track, and then moved back inside the facility.

At five of those trivia stations, competitors picked a playing card from a volunteer’s hand, and they tried to put together their best poker hand with what they drew.

So, essentially, one could answer all the questions right, but if he or she had a bad hand, that person could lose. A Grand Prairie, Texas, resident, Chrislip felt 70 percent confident of his answers, but he also knew he had a poor poker hand with two threes, queen-high.

Each participant received one point for each correct answer and a maximum of 10 points for the poker hand. Ties are broken by a tiebreaker question and/or best poker hand.

After each participant finished, he or she was handed a rose from a volunteer to mark the moment.

Angie White was the volunteer who handed out the roses. A Scottsburg, Ind., resident, the 55-year-old acknowledged she was lucky to be assigned that task.

I think it’s awesome. Great people. Lots of veterans in our family – my dad and my brother and uncles and great uncles through all the wars.”

Chrislip gave his rose to his wife, Linda, who he’s been married to 40 years. He could’ve cared less about the points. The rose made his day.

“I didn’t come to win anything, I got my rose,” said Chrislip, a PVA Lone Star Chapter member. “Oh yeah, (I enjoyed it) — the view, then I got my picture taken down there on Secretariat and all the roses and pictures down there and the spheres and the spires on top of the building. It’s just beautiful scenery all across the outside there where the horses were doing their little practice this morning. It’s beautiful. Better than a morning at Juarez (Mexico) – I’ve been to that track down in Juarez.”

Meanwhile, longtime NVWG participant Steve O’Brien was just happy to keep his Games streak alive. Despite getting in late and missing the opening ceremonies, O’Brien made it to his 15th straight Games and 16th overall.

A Tucson, Ariz., resident and Navy veteran, O’Brien, 50, competed in wheelchair softball. Although his Red team lost to the Blue team, he still had a good opening day. He just enjoys meeting old friends and the competition. His advice to newcomers in the sport – be patient.

“Just be patient and keep moving. All the momentum helps. Momentum is key, that’s for sure,” said O’Brien, who sustained T12 and L1 injuries Dec. 2, 1993, from a fall working on a roof as a firefighter and served from 1986-1994 as a hull technician/firefighter.

Besides softball, O’Brien is also competing in wheelchair basketball and archery. He used to do archery as a kid and decided to pick it up again.

“And it was an interesting challenge, something different,” O’Brien says. “Something new, as we’re aging here I guess. Not getting any younger, that’s for sure.”

O’Brien acknowledged the NVWG changed him.

“The emotional side, I guess it’s opened my eyes up to what you can do instead of what you can’t,” he said. 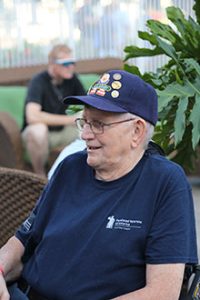