Then, the Marine Corps veteran took a couple of deep breaths to calm himself before taking off, as the crowd of supporters rooted him on inside the Bell Bank Park Legacy Hall C in Mesa, Ariz.

“The crowd, it pumps you up,” says Hoy, who is competing in his fifth Games. “Just having them here watching. When we were in New York [last year], we didn’t have a big crowd because of [the novel coronavirus] COVID [-19]. Having the crowd just really pumps you up.”

In this year’s Class 4/5 slalom course, wheelchair athletes took on obstacles such as uneven steps, moving ramps, a disc golf challenge, Concept2 SkiErg pull-downs and a rope climb up a steep ramp.

For the 62-year-old Hoy, who served from 1976 to 1981 and sustained a level T12 incomplete spinal-cord injury (SCI) from an aneurysm in November 1990, the whole first half of the course was fairly easy. He even made it in the basket on the disc golf obstacle, which required athletes to throw three discs. For every disc that made it in the basket, 10 seconds were taken off their final time. That helped him out when he stumbled and received a penalty on the uneven steps.

“I was trying to breeze through it and the front wheels got stuck and it threw me forward. I don’t strap myself in when I do these things,” the Stockton, Calif., resident says.

Still, he finished the course in 4 minutes, 14.95 seconds and took the silver medal in the Open Class 5 division. Besides competing in slalom, Hoy had a full schedule with wheelchair softball, air rifle, archery, bowling and table tennis.

“I’m going to sleep well tonight,” he said after finishing the course. “Today was the toughest because we had a softball game and slalom. Those are two really tiring sports.”

He says he doesn’t really train for the slalom; he just likes the challenge.

“This is stuff that challenges you pretty much in everyday life, especially with the wheelies,” Hoy says. “You’re just applying it to course and a timed course.”

He loves the Games because he likes to help the newly injured. He says if they don’t try, they don’t know what they’re capable of doing.

“It’s just pumping everybody up and get them to keep coming and to keep trying,” Hoy says. “My motto is come out here and try everything at least once, in sports or life. Life is short. You can’t just sit around and not do anything. I’m happy when I come here. If something goes wrong, I’m still happy.”

PVA Gateway Chapter member Bill Lytton was happy, too, after finishing the course in 2 minutes, 34.14 seconds and earning a silver medal in the Class 1B division course at his fifth Games.

“It’s just fun,” he says. “The obstacles and just, it’s hand-wheel skills along with the competition. Just having fun.”

He finds the mental part of the slalom the most challenging and says it’s both a competition against yourself and others.

“For me, it’s myself for not making mistakes, which I focused on this time and I actually did that,” Lytton says. “I didn’t have any points against me or seconds taken off. But then it’s also competition with others. Especially the ones I know that area really close to me, you know, like I know Josh [Burch] is always going to beat me because he has a little bit more function. But the other guys, we’re all close to the same level.”

“At home, I just set up obstacles courses really to do circles around stuff barely wider than my chair,” he says. “For me, that’s the part that always gets me is doing the backing up around the cones and doing circles around something. Like usually, the last couple [Games], we’ve always had a ball, and we had to go around the ball without hitting the cones and without hitting the ball. So that one’s always been one of the ones that I usually test at home.”

He’s also competing in wheelchair rugby, which is the main reason he comes to the Games,  and completed powerlifting and boccia earlier in the week.

“You’ve got to train for this,” Lytton says. “I train for rugby. Plus, it’s the mental side of it, too. It keeps your focus because you know what you’ve got to be doing. You know in each event what you have to do. So, it helps to stay focused and helps you stay in shape.” 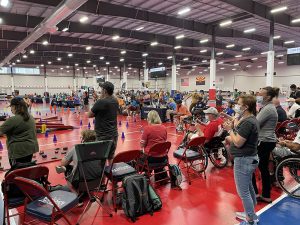