A new device from beauty company L’Oreal that could provide those with disabilities an easier time applying lipstick debuted at the giant consumer electronics show known as (CES) last week in Las Vegas.

That’s one major breakthrough in the beauty and fashion industry.

The device, called HAPTA, is a handheld, ultra-precise smart makeup applicator for users with limited hand and arm mobility, according to the L’Oreal website.

HAPTA has a magnetic attachment that allows users 360 degrees of rotation and 180 degrees of flexion and incorporates technology originally created by research company Verily, which focuses on life sciences. The device has built-in smart motion controls, along with customizable attachments, that give users an improved range of motion and better application.

Users rely on a “clicking” feature that allows them to set the intended position and have it stay in position during use. The user can also lock it in a customized setting for future use. HAPTA runs on a built-in battery, which provides one hour of continuous use (approximately 10-plus applications) on a full three-hour charge, according to the website.

HAPTA will be piloted with a lipstick applicator later this year from L’Oreal-owned Lancôme and additional makeup applications in the future, according to the website.

But that’s not the only major accessibility news that came during CES. Earlier in the week, eight companies and their products received honors in the inaugural 2023 CES AccesABIILITY Awards, which were hosted by Reviewed, a division of USA Today.

Here are this year’s winners:

RendeverFit — The world’s first visual reality platform that merges physical exercise with cognitive fitness and socialization, designed specifically for seniors, according to its website. It includes a series of exercise games. It’s available in various nursing home facilities and hospitals. Rendever Cofounder and CEO Kyle Rand says people with spinal-cord injuries or in wheelchairs could also use the product.

BiPed — It’s a harness with artificial intelligence capability and GPS functionality that blind and visually impaired people can wear over their shoulders to guide them with short sounds and warn them about nearby objects. Its website says it’s a complement to a guide dog.

Beeyonder — This is a virtual tour platform with live-streaming video feeds on video platforms led by qualified tour guides. So, with common software, people who are stuck at home can see the whole world with professionals in real time.

Samsung Realumino Mode — People with low vision can see videos and photos more clearly with this visual aid app. After connecting a Samsung mobile phone to the virtual reality (VR) device, they have settings including VR mode, which makes photos and videos more lifelike, regular mode (non-color invert mode, which makes photos and videos less blurry) and color invert mode that inverts the color and displays it in high contrast to read the text.

Nest Self-Dispensing Electric Toothbrush — An electric toothbrush, it automatically dispenses a dot of toothpaste on the toothbrush’s nylon bristles. This makes it easier for people with disabilities to brush their teeth because they only have to use one hand.

Lexie B2 by Bose — This is a rechargeable and self-fitting over-the-counter hearing aid powered by Bose. These are Food and Drug Administration-regulated and can be teamed with the Lexie app, a self-tuning mobile app that’s clinically proven to provide audiologist-quality customization for individuals 18 or older with perceived mild-to-moderate hearing loss, according to the website. They do not stream music or take calls.

Wisear — These earbuds have tiny electrodes embedded inside them that record a user’s bioelectrical activity from the brain, eyes and facial muscles. An amplifier strengthens the signals to readable levels, enabling artificial intelligence algorithms to analyze the signals, according to Wisear’s webite. Those algorithms are interrupted and allow a user to take action on his or her device hands-free and silently. 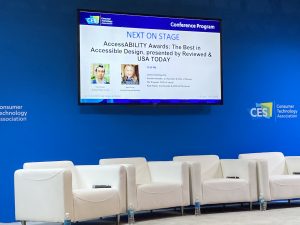