A group of wheelchair users from the Chicago non-profit group, Access Living, have made their trip on Amtrak without paying the $25,000 in extra fees the railroad originally said it needed to make room for in one of their cars.

Access Living Housing and Transportation Policy Analyst Adam Ballard says his Jan. 22 trip with his associates from Chicago to Bloomington, Ill. Was “really interesting,” but otherwise normal. Ballard, is one of five people who traveled using a wheelchair in a 10-person group that was told last month by Amtrak that a new policy was put in place, requiring them to pay $25,000 for it to take seats out of the train car and accommodate all the wheelchair users.

Following media coverage of the situation, Amtrak reversed course on the charge and the group made the trip for the regular price of $16 per person. Ballard says Amtrak went all out to make sure the trip went smoothly.

“The trip was really uneventful overall, but Amtrak really rolled out the red carpet for us,” Ballard says. “There was much bigger staff presence there than usual, they had extra people working the list to get us in quicker. There was an extra attendant who was there just for our group.”

“After further review, Amtrak has determined to suspend the policy in question.  It was never meant to be applied to this situation and we apologize for that mistake.  We are glad it has all worked out and we were able to accommodate our customers’ trip.  We will do better next time. We are America’s Railroad and we want to provide more trips, not fewer.”

According to Marc Magliari, an Amtrak spokesman, the policy is for groups that ask that a train be reconfigured to fit passengers. Specifically, these are groups traveling with musical instruments, sports teams with equipment and various student organizations that have asked for cars to be reconfigured to accommodate them.

“I’m still unclear of how we got roped into those other groups and they have not explained that yet,” Ballard says.

In response to Amtrak’s statement, Access Living issued a statement on their website, and mentions, “#AmtrakAccessNow”, a hashtag the group started during the ordeal.

“People with disabilities deserve to be accommodated, and to be respected as customers, whether we ride individually or as a group.”

Paying very close attention and playing a very active role in the case is Sen. Tammy Duckworth (D-Ill.). Duckworth, who is bilateral amputee, previously called out the governmentally funded Amtrak, along with their CEO Richard Anderson.

“Since the story broke out last week, the senator has asked for a meeting with the Amtrak CEO, and they are trying to sort this out. We are supporting that,” Ballard says. “We are trying to also get a meeting together with some people from Access Living, Amtrak and people from the Senator’s office to iron this out.”

Access Living is still waiting for Amtrak and Sen. Duckworth’s office to set a date for the meeting, though Magliari says that a scheduled meeting between the Senator and Amtrak is “very close” to being scheduled, and Amtrak is, “waiting to hear back from the senator’s office”.

“I am feeling that we have made some progress with them,” Ballard says. “Due to the nature of our work, we know that we will be going back down in the state later next spring with even bigger groups than this one, so we need them to commit to changing that policy.” 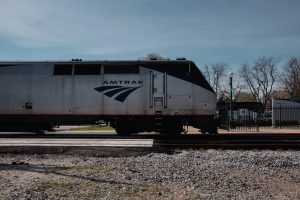