June 1 is the first day of the official hurricane season, which runs until November 30. (Take note of this, especially those of you who reside in the U.S.’s Eastern seaboard or Gulf Coast states.) While Florida is recognized as the hurricane state, many other emergency situations present added concern for people with disabilities, says Remer “Chip” Wilson, disability coordinator for the Florida Division of Emergency Management. These include wildfires, floods, tornadoes—some spawned by hurricanes—and potential nuclear-reactor mishaps.

Although various levels of government are responsible for providing a certain amount of protection and/or safety in the event of a disaster, Wilson says proper preparation begins with the individual. Preplanning alleviates a great deal of uncertainty and anxiety and gives people a greater chance of surviving an event. This is particularly true for people with disabilities.

“It’s often difficult for most people with disabilities to prepare for a trip to the store, a visit to the doctor’s office, or just to go somewhere for relaxation,” Wilson observes. “These difficulties are multiplied when they must get ready under extreme conditions, usually at the last minute.”

Wilson lists many emergencies and attempts to underscore the need for preplanning to increase chances for survival:

– More than 60 people were killed by tornadoes in Florida during the first quarter of 2007.

– The highest point in Florida is 345 feet above sea level (Britton Hill near Paxton in the Panhandle). Due to the relatively flat terrain and amount of water surrounding it, Florida is vulnerable to flooding.

– Four people were killed and dozens injured in a 70-car pileup on Interstate 4 in January 2008.

These examples are for Florida. But what about other states?

A power outage goes way beyond inconvenience; it could be deadly. In Houston after Hurricane Ike (September 2008), the Associated Press reported Kristin Graham and her son, Gatlan, had to find a hotel room with electricity because their own power was down so long, and they’re among the growing millions who depend on home medical equipment. A generator and stack of batteries didn’t help Gatlan’s ventilator and life-support equipment when Ike’s blackout lasted 14 days and cost the family more than $1,500 to keep the 17-year-old alive.

When Hurricane Gustav hit Louisiana in 2008, dozens of people evacuated to government medical shelters, where surprised officials had to scramble to find enough equipment when backups in Baton Rouge failed.

While utilities in every state maintain medical priority lists to track who depends on power for life, an Associated Press survey found huge variations that suggest only a fraction of people know they can sign up. Illinois’ biggest utilities together report 10,000 individuals on critical-care lists; neighboring Indiana’s biggest list carries only 2,000 names. Even if people sign up, in large outages companies can’t restore power to one home before another down the street.

Millions more use other at-home equipment: dialysis machines, nebulizers, IV and nutrition pumps, and CPAP breathing masks to name a few. Power failures bring the most immediate risk for users of ventilators, heart pumps, and oxygen. Ventilators and heart pumps have internal batteries that last 45 minutes to a few hours, time to put on longer-lasting batteries or get to help. Some portable oxygen concentrators can run on batteries for three or four hours or be plugged into a car adapter; typically, people depend on oxygen suppliers to deliver old-fashioned tanks of the gas for emergency use.

Dr. David Prezant, chief medical officer for the New York City Fire Department, is pushing for medical registries of people who are power-dependent.

“When there’s a blackout—citywide, nationwide—we’re really unprepared with any structured database, knowledge of who these people are, and where they are.”

Registries are forming from Benton County, Ark., to North Dakota. A northwest Ohio pilot project issues cards to life-support users to hang in their windows during a flood or tornado, signaling if they need help or are okay.

The 2003 Northeast blackout was Dr. Prezant’s wake-up call. According to a study in the journal Critical Care Medicine, he tracked citywide 911 calls plus emergency room (ER) visits at his Montefiore Medical Center during the nearly 29-hour blackout. The falls and heart attacks doctors expected didn’t materialize, but paramedics and the ER had a surge in people with at-home oxygen, ventilators, and other respiratory equipment who needed help or feared they would soon.

To help people prepare, the U.S. Food and Drug Administration (FDA) planned to issue the first checklist for device recipients to receive when leaving a hospital.

“This is a huge vulnerability,” says Dr. Lewis Rubinson, of the University of Washington, who advises the government on disaster preparations and is formulating guidelines for emergency supplies.

Rubinson and Prezant stress that, whatever a family’s backup plan, local emergency officials must know how many people they might have to rescue. Getting home-care companies to share customer lists is a good start. Dr. Allen Dobbs, chief medical officer, National Disaster Medical System, says, “We have to have reliable contingency backup plans for these folks.”

Florida’s Family Disaster Planning Web site (www.FloridaDisaster.org) emphasizes that in a major crisis, emergency workers may not be able to reach everyone right away; in some cases, it may take three or more days for help to arrive. The Web site helps create a printable, personalized “Family Disaster Plan” for emergencies. Included are:

– Recommended amounts of food and water based on family information

– Checklists of important steps to take before, during, and after a disaster

Wilson asks rhetorically, “What do all [the people described in this article] have in common? None of them thought [natural disasters] would ever happen to them!” He advises that while they are a viable option, shelters should be your last choice—and adds, “Never say never. Be prepared for any emergency.” 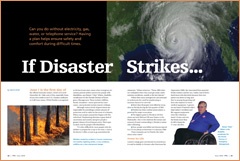