Back In Their Lane

The American Wheelchair Bowling Association (AWBA) sanctioned competition was a return to play for many bowlers who had not participated since the onset of the novel coronavirus (COVID-19) pandemic. The FGC tournament normally draws up to 30 players.

PVA member and combat-injured Army veteran Carl LaGrotteria (Beachwood, N.J.) was one of this year’s bowlers.

“Wheelchair bowling is an activity that I love because it gives me an opportunity to compete with other guys that are disabled and find commonality and friendship,” the Vietnam veteran said. “It’s different than bowling with leagues [at home] with other stand-up bowlers, because you are on equal footing. I enjoy [this tournament] very much.”

April 22 was the start of singles play. Muscle memory kicked in as bowlers continued to read and adjust to the lanes. But with no clear path to victory at the end of qualifying play on April 22, the April 23 series decided who entered the roll-off for each individual division.

In the B division, fifth-placed Deb Moulies of Florida and fourth-placed Dave McGinnis (PVA FGC Chapter) squared off. Moulies, a top women’s bowler, entered with a 100 handicap and played scratch games of 164 and 88, defeating McGinnis (221 total game). Moving forward, though, Moulies fell short of Dan Formento (PVA Nevada Chapter), who carried a 96 handicap and eliminated May to enter the finals against Mahaney.

Nelson and Benn dueled in the finals, but No. 1-positioned Benn was the top pin chaser (245-183), adding to his doubles conquest.

“I really enjoy the sport because you can bowl by yourself. It’s also very challenging,” he said. “Bowling is a good way of getting out of the house, meeting new people and having a good time, instead of sitting in your wheelchair crying about why you got hurt. It’s beautiful. I think everyone should get involved, whether you are walking or in a wheelchair.”

According to statistics by the International Bowling Federation, veterans with disabilities comprise 68% of all wheelchair bowlers in the United States. Bowling is unique, too, since there are no classifications. Rather, players are grouped based on their bowling handicap.

Bowling also can be a lower-cost adaptive sport, since bowlers can use their personal everyday wheelchairs. The chairs just need good brakes and front caster locks to prevent side-to-side movement when the bowler leans over to roll the ball.

The only special equipment are a strike ball and a spare ball.

Bowling is a longstanding PVA sport. The PVA Bowling Tournament Series is designed to assist in the rehabilitation of PVA members by providing them with an introductory experience in wheelchair bowling.

In addition to tournament match play, PVA partners with the AWBA to provide clinics at five chapter-hosted tournaments each year. Clinics provide instruction on equipment adaptations, ball weight, lane etiquette and techniques, such as how to approach the foul line.

Advanced strategies include correct hand position, a bowler’s mental approach and the three phases (skid, hook and roll) of rolling a bowling ball.

Despite the fact that this year’s tournament was missing the popular Up/Down competition that raises chapter money and pairs wheelchair bowlers with standing bowlers in pursuit of the contest’s coveted trophy, there were many smiles in Florida.

LaGrotteria said the community is what ultimately drew him to the sport.

“I’m sad that I didn’t find [wheelchair bowling] until I was 71 years-old, but now that I’m here, I plan on staying,” he said. 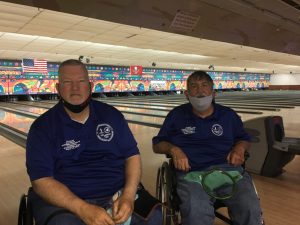