Although his teammates chanted “M-V-P, M-V-P” as he was called up to receive his gold medal, the Light Blue Team’s Antoine Gray didn’t see it that way.

The 40-year-old Navy veteran just wanted to help his team any way he could.

He did that, leading Team Light Blue (“War Admiral”) to a 55-38 championship game victory over Team Gold (“Barbaro”) Tuesday afternoon at the Kentucky International Convention Center at the 39th National Veterans Wheelchair Game, co-sponsored by Paralyzed Veterans of America and the Department of Veterans Affairs, in Louisville, Ky. All the wheelchair basketball teams were named after Kentucky Derby-winning horses.

“It’s cool, yeah, to be recognized. But, I mean, I just wanted to get my team and everybody involved and make sure everyone had fun,” said Gray, who served from 1996-98 as a nuclear electronics technician and was injured August of 2000 from a car accident after he fell asleep while driving and drove off a freeway overpass in Houston.

Team Blue led Team Gold 27-17 at halftime before breaking the game open in the second half. Gray earned his second medal of the games. He also earned a gold in the obstacle course known as slalom.

“I didn’t swim this year because my shoulders were tight and I wanted to be here for my guys for basketball but actually breaststroke is my favorite,” Gray said. “Ever since I learned how to swim, I’ve always been in the pool and swimming that’s my favorite sport next to boxing.”

“It was exciting, very, very exciting,” said Paralyzed Veterans of America vice president and Blue Team member Robert Thomas. “The game could’ve went any way at any point and we were lucky to be able to get that goal in sudden death.”

An Army veteran, Thomas loves power soccer and has attended the NVWG since 1992. He’s only missed one NVWG since 2010 because of the death of his father, Robert. It’s his favorite event.

“It’s the only team sport that you can do in a power chair,” said the 49-year-old Thomas, who served from 1987-91 as a power generation equipment repairman and sustained C-5 and C-6 injuries after a June 3, 1991, diving accident while being stationed in Fort Bragg, N.C. “Since they brought it into the wheelchair games, it’s been growing exponentially every year and I hope to see us get more teams involved. But I do understand that time plays a factor. But I think everybody really loves playing power soccer.”

In his sixth National Veterans Wheelchair Games, Team White’s Mike Luckett earned his first quad rugby gold medal. Although he was unable to play the last three matches because of a bicep injury from powerlifting, he still had a blast.

Team White (“Assault”) led after every quarter and rolled to a 53-42 win over Team Black (“Secretariat) in Sunday’s quad rugby championship match at the Kentucky International Convention Center in Louisville, Ky. All the quad rugby teams names were named after Kentucky Derby-winning horses. Luckett played in the team’s first two games before having to sit out the final three.

“I’m proud of the team, being able to see them like being able to finish,” said Luckett, an Army veteran who served from 2008-2013 as a logistics officer and was injured Aug. 7, 2011, in a motorcycle accident in Richmond, Va. “When I was in there, I pushed as hard as I could, made some plays for the team and I’m glad the amount of effort, at least the stuff that I put in, I hope that contributed to getting the gold even though I wasn’t able to play the last three games.”

A Paralyzed Veterans of America Mountain States Chapter member, the 33-year-old Luckett participated in the powerlifting competition at Fourth Street Live! in downtown Louisville this past Sunday. However, he injured a biceps muscle on his second lift and had to shut himself down the rest of the event and competition. He earned a silver medal with a 110-pound lift. 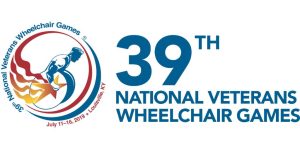