The PVA Architecture Department helps ensure places such as arenas, museums and medical centers are accessible as well as usable

When Mark Thompson looks at architectural plans that cross his desk, PVA’s senior associate director of architecture takes a deep dive, evaluating them beyond codes and regulations.

When he looks at a baseball stadium seat, he sees a person sitting in it, trying to watch a favorite player turn a double play. And when he looks at a ramp, he looks to see if the family that needs it can use it reasonably without exhausting themselves before making it to their seats to see a show’s opening act.

As an architect (American Institute of Architects, or AIA) with the Paralyzed Veterans of America (PVA) Architecture Department, Thompson views stadiums, care centers and museums through a different lens from his peers. He and his team members, including Mark Lichter, AIA, director of architecture and facilities; Wayne Broadfield, AIA, associate director of architecture; Rachel Krishnan, AIA, architecture/project management; and administrative assistant Linda Johnson are based in Washington, D.C., and are committed to accessibility. And it’s that uncommon commitment that brings rise to architecturally unique spaces where both accessibility and usability flourish for every visitor.

“In general, most architects are informed on Americans with Disabilities Act (ADA) requirements. But we’re bringing a different aspect to it and going above and beyond the ADA,” Thompson says of the PVA architectural team. “We have experiential connections with people in wheelchairs. They know what works and what doesn’t work on the ground.”

How Things Get Started

Wheelchair-accessible seats at a baseball game or inside a football stadium or theater need to be more than just simply accessible.

There are a number of variables that go into the positioning of the seat and the space allocated to it. ADA statutes provide a framework, and PVA architects build on that framework to create a better user experience. It all begins at the local level, as a network of PVA chapters across the country advocate for accessibility and pull PVA architects, such as Thompson, in as new projects surface.

“We get most of our referrals through the chapters because they’re on the ground and know what’s going on. We don’t have our ears to the ground all over the country,” Thompson says. “There are other times we make connections with architects themselves and try to get involved on projects we know of. That happens more often in the D.C. area.” 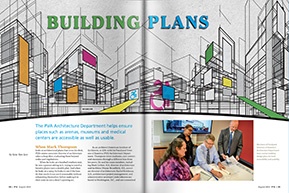