In the midst of all the National Veterans Wheelchair Games (NVWG) excitement, Paralyzed Veterans of America (PVA) leadership took some time to send women veteran athletes an important message: Their voices matter.

Jones and Castle both expressed their desires to have more women involved in PVA, both as members and as leaders in their respective chapters. Castle urged those in attendance to advocate for themselves and make their needs known to PVA leadership.

Jones also repeatedly reminded the women, “This is your organization,” and emphasized how responsive PVA’s national leaders are to requests for assistance or guidance.

PVA Buckeye Chapter member Jennifer Steele was one of the women in attendance. The Army veteran, who has multiple sclerosis (MS) and is a moderator for the PVA Women Empowered! Facebook group believes it’s important to reach out to other women veterans with spinal-cord injury and disease (SCI/D) because there are many who don’t know about the benefits available to them and programs they can access.

“There’s strength in numbers, so a lot of the time, we’ll have women who’ll jump on the [Facebook] page and they just [say], ‘I’m having a hard time with this. What do I do?’” Steele says. “And in the comment section within, like, an hour, it’s that information coming at you from people who … know more than I do about some things. And we all kind of get together and help each other … I just heard some women out there saying, ‘I didn’t even realize how many of us have MS. I didn’t realize if you had MS, you went to a spinal-cord clinic.’ I’ve heard that, too. If we can get the information out, it’s there. It’s just some women don’t know to ask. A lot of people don’t know to ask.”

Steele says at her first NVWG in 2017, there were only 65 women competing out of about 600 athletes. And because women are such a small part of the SCI/D population, they’re often overlooked.

Steele says some of the women in the group mentioned they had to compete against men in some sports at the Games.

“And it shouldn’t be like that for any of the events at all, because it’s not saying men are stronger, men are better. They’re different,” Steele says. “Physiologically, men are different, and so there are going to be things they are able to do that we aren’t able to do the same way. Not that we aren’t able to do as well, but we can’t do it the same. So, when you try and put men and women competing against each other, it’s kind of like, well, that was dumb.”

“Or even like the shirts or T-shirts that they give out, they’re all men’s shirts,” she says. “Small things like that, because again, those things fit women differently than they do men.”

In addition, she thinks giving women veterans with SCI/D more public visibility would help their peers and aspiring young female athletes realize they’re not alone and there are others like them.

“I would just love to in general see more women representing what’s going on here because I think that gives people something to look up to,” Steele says. “Yeah, we got a whole lot of guys who end up on the banners and they end up in the books and stuff, but it’s kind of, like, little girls need someone to look up to, too.”

Steele also echoed Castle’s comments that more women need to demand that their PVA chapter leaders listen to them, and they can’t take no for an answer.

“It’s just very much, like Shaun was saying, you have to make them listen, and the more of us there are, the more likely we are to be heard,” she says. “So, we’re very much trying to give women an opportunity to realize you don’t have to feel so small or insignificant when you’re here. Yes, there aren’t as many of us, but that doesn’t mean we don’t matter, too. So, we’re just trying to give everybody kind of a sisterhood. We just need that.”

Steele applauded Castle for acknowledging that he doesn’t understand women veterans’ struggles, but he is always willing to listen to and fight for them.

“He is not just sitting up there giving lip service saying, ‘Contact me anytime,’ and then you can’t find him. Oh, no. He will make stuff happen, and that is very rare,” Steele says. “I wish it happened more, but it’s just the world we live in and the good ol’ boys club is still around, so that’s why we’re trying to change some things. We’re not trying to be a whole bunch of, ‘Men are pigs and we hate men.’ Hell, no. We just want to be a part of it. Let us be a part of it.” 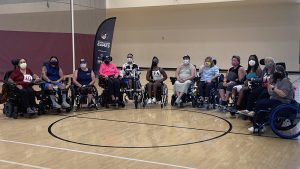