Staircases, steep hills and bumpy door thresholds have long been the bane of wheelchair users, but a company from Switzerland has a new device that can literally have you climbing to new heights.

The BRO from Scewo is a powered, self-balancing wheelchair that can climb stairs and steep hills. Debuting at this month’s massive technology trade show called CES in Las Vegas, the BRO has two large, beefy wheels that can overcome obstacles of about 2 inches and also features two tracks that can be deployed to climb stairs and hills up to 36 degrees.

“It gives the people a lot of freedom. We hear a lot of stories, and some are very emotional,” says Scewo co-founder and CEO Bernhard Winter. “The BRO has allowed people to go back to holidays with children because the house is now accessible. We’ve heard about other people who have gone back to teaching because the classroom is now accessible.”

A test drive on the showroom floor near the Switzerland Pavilion at the Venetian Expo Center in Las Vegas made it easy to see how the BRO is used and the freedom it can offer to those who use wheelchairs.

Operated by a simple joystick and touchpad that can be located on either arm rest, the BRO can hit up to 6 mph and doesn’t require any upper body use. An optional smartphone holder allows for the use of an app that features simple-to-understand icons to activate the chair’s various functions. Nimble and intuitive, the BRO always keeps you stable and upright by utilizing an onboard gyroscope and multiple sensors.

However, for all of its features and maneuverability, it’s the BRO’s stair-climbing capability that really hits the “wow” factor. When approaching stairs, you press the stair icon. The tracks deploy from under the chair, its sensors will recognize the obstacle and a rearview camera is displayed from the smartphone app. All you need to do is use the joystick to go up or down at a maximum of 30 steps a minute. During the climb, the sensors and gyroscope stabilize the seat and keep you level. It also adjusts the center of gravity, so the seat is always in the middle of the tracks so you don’t fall.

The chair’s ability to make such a big impact on people’s lives is one of the reasons why it’s called the BRO, short for brother.

A Computer on Wheels

Ironically, Winter says the BRO started out about five years ago as a project to design a “cool” robot. What Scewo ended up creating is a sleek, multi-function wheelchair that looks like something Marvel Comics’ wheelchair-using icon Professor X would operate. Winter calls his creation a “computer on wheels.”

The BRO also features an integrated seat lift to make transfers easier. The seat can rise almost 3 feet to make it possible to have an eye-to-eye conversation with someone who is standing or to reach a high shelf. It can also lower to about 17 inches to make it easier to sit at almost any table. The BRO allows you to adjust the seat depth, backrest, footrest and armrest to your specific needs. The seat back can also be folded down and detached so it can fit easily into a car, and it also features a built-in backpack. 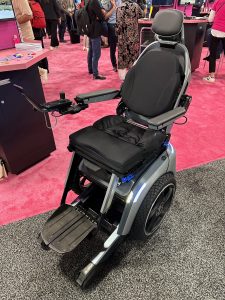 Able to travel about 22 miles on a single charge, the BRO isn’t available yet in the United States. Winter says the company is working on approval from the U.S. Food and Drug Administration for what will be labeled a Class 2 medical device, and he hopes it will be available in the U.S. in the next year or two. The BRO has been available in Germany for about a year. It retails for about $42,000 (U.S. dollars), and Winter says the response there has been strong.

“It’s crazy, we put a video online and this went viral,” Winter says. “Then, we had many people calling us and saying, ‘We want to buy this.’ We have more than 100 units driving around already.”

Winter says there are three things that really set the BRO apart from other wheelchairs. He says the first is the technology and notes that software updates are offered every three months to provide new features and bug fixes. There’s also a SIM card in the chair that allows Scewo to provide remote support if you get stuck. Winter notes that customer service is a big part of what they offer.

“We learn from our customers what they need and what they want, and we want to build a good solution,” he says. “No one else has this on the market.”

The other two things that make the BRO stand out, according to Winter, are its stair-climbing function and the chair’s overall design.

“We wanted a product that looks great,” Winter says. 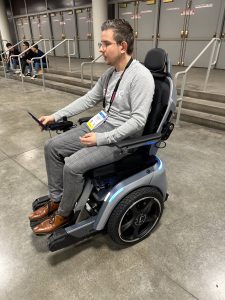