For paralyzed veterans like Bobby Click, Jack French and Amy McKee, the National Veterans Wheelchair Games (NVWG) are about more than the medals.

Although the trio competed in different sports on Thursday during the Games’ second day in Tempe, Ariz., and surrounding areas, they can all agree the camaraderie is what they crave.

“When I first started, it was all about the medals, until my second year,” says Click, a Paralyzed Veterans of America (PVA) Buckeye Chapter member and Marine Corps veteran. “Then, I realized it wasn’t about the medals. It was about all these people. It makes me feel so good to come here. It does wonders for me.”

Click competed in 9-ball billiards at the Arizona State University Sun Devil Fitness Complex. An Ashland, Ohio, resident, he served from 1968 to 1970 and sustained a level C1-3 spinal-cord injury (SCI) from a gunshot wound in 1969. This is the 70-year-old’s 12th year competing at the NVWG, which runs through July 12 and is co-sponsored by PVA and the Department of Veterans Affairs (VA).

Click has won six gold, three silver and three bronze NVWG medals over the years and has played billiards for at least 20 years. Although he played before his injury, competing in a seated position is completely different.

“It’s a whole new learning thing, because standing and sitting, it’s a whole different view,” Click says. “Standing, you can see the whole table. When you’re down here, all you see is the ball. That’s a heck of a difference.”

Click says he plays at least once a week at a local bowling center back home and was quick to offer a novice opponent a few tips to improve his game.

“That’s the thing to do is encourage each other. We want to be just as happy as they are, and I love when I see that,” Click says.

Meanwhile, 69-year-old French, a member of the PVA Lone Star Chapter Board of Directors who lives in Corinth, Texas, challenged himself with adaptive fitness.

The event drew a large crowd of supporters and spectators who cheered on the athletes inside the Arizona State University Sun Devil Fitness Complex.

“All the yelling, I was doing it when I was sitting there [watching the other athletes],” says French, who served in the Navy from 1975 to 1978 and has primary progressive multiple sclerosis. “I don’t pay attention when I’m competing, but when I was there [watching], it was nice. We get to know people from all over the country. Now, we’ve got friends from this from everywhere. It’s camaraderie. We get all the military guys together, it doesn’t matter who it is, I can tease them. They can tease me. We’re all family. We’re all brothers and sisters. It’s exciting to come do this because everybody works hard to get here.”

This is French’s second in-person NVWG, and he also plans to compete in powerlifting, air rifle and pistol, shot put and discus. He competed in the at-home NVWG version last year, earning a gold medal in adaptive fitness, and figured he might as well try adaptive fitness again at this year’s Games. He says the overhead weight presses got a little tiring for him at the end, but the medicine ball and Ski-Erg were easy.

PVA Mid-Atlantic Chapter member and Marine Corps veteran McKee can relate. The 36-year-old Virginia resident’s main objective while competing in team badminton was to just have fun. Although she and her teammate, Bill Brandt, lost all of their matchups in the double-elimination tournament, she says the camaraderie’s always there no matter what — win or lose.

“It’s the first time. I didn’t have a strategy. Try and hit the birdie, and I failed at that a lot, but I tried,” says McKee, who served from 2004 to 2017 and sustained a level T4 SCI in a motorcycle accident in 2016. “I thought we were going to win the second game, and no, I messed that one up.”

She played in the badminton exhibition at last year’s Games in New York and sometimes practices at home with her kids, 13-year-old Paul and 15-year-old Amber.

“They hit it over my head and I can’t reach it. Or they play ‘mom in the middle.’ They think that’s a fun game,” McKee says.

She enjoyed learning something new in badminton this year, which marks her fifth NVWG.

She also plans to compete in archery, motorized slalom (obstacle course) and her favorite, power soccer.

But she doesn’t worry too much about winning in those sports either — or having to compete against men.

“I’ve been competing against guys my whole life,” McKee says. “It’s no different. We’re all just a bunch of big kids.” 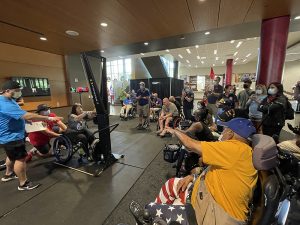