The Paralyzed Veterans of America (PVA) Arizona Chapter received a big win just in time for Veterans Day when the Luis Zendejas Foundation donated boxes of T-shirts, sweatshirts and hats from the 2022 Fiesta Bowl game featuring Oklahoma State University and Notre Dame, packages of wet wipes and more Nov. 10 at the chapter’s office in Phoenix. Those items will be given to PVA members and others in need.

An Arizona State University (ASU) Hall of Fame placekicker who played in the NFL for the Dallas Cowboys and Philadelphia Eagles during the late 1980s and early 1990s, the 61-year-old Zendejas says he tries to give back where the help is needed the most. He expressed his interest in helping the chapter reach its goals in the community.

“I do this all on my own. I love it,” Zendejas says. “I help all types. This [PVA] was one of them that realistically we didn’t hit as much because we don’t know the ins and outs of it. Tell me what’s needed out there. There’s a lot of little places that we don’t know what’s needed.”

PVA Arizona Chapter Sports Director Diego Suazo, who grew up watching Zendejas kick for ASU in the mid-1980s, says the delivery is a good first step toward a future relationship together.

“I think it’s awesome that he’s doing this,” Suazo says. “It just shows his character, giving back to the community. He’s been fortunate in his career and has made some big connections, and he’s just passing it forward, and I think it’s awesome. I think it just builds good community relations, and at the same time, if there’s something, like the sports teams that are around the Valley that I played for or [PVA Arizona Chapter Treasurer] Jerry [Newport], if they need certain things as far as maybe some gear or something like that, he’s going to come through with that. It’s pretty good.”

Phoenix resident and Navy veteran Michael Hall was part of the crew Zendejas brought to drop off the donation. The 28-year-old served from 2014 to 2015 and has been training with Zendejas in kicking for about two years as therapy to overcome his post-traumatic stress disorder and anxiety.

“The thing about kicking is it’s a routine and it’s a lifestyle, and even though it’s football, it’s not as much contact,” Hall says. “And I like having that routine. I like having that camaraderie with the people around me and stuff, and I like, you know, having something to wake up and go do every day.”

Hall says he felt blessed to have the opportunity to give back to other veterans, especially those with disabilities.

“It just feels like another day. Like, this is something that just should be done, just like breathing and drinking water,” Hall says. “People should feel the need to help veterans. I’m an able-bodied person in a sense of I can move around and I can walk, so anything I can do for a person that they’re lesser off than me in any way possible, that won’t completely destroy my own resources, I will do that.”

For more information on the PVA Arizona Chapter, visit azpva.org. 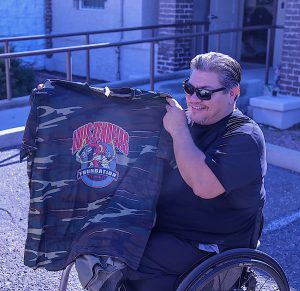