The past two Super G champs finally got the chance to battle each other. And for the first time, it was outdoors and hardcore Spartan style.

The top seed, Conner defended his title, defeating second seed and Navy veteran Enrique Lopez in the Super G championship at 4th Street Live! in downtown Louisville. He knocked off eighth-seed Ken Brookins in the quarterfinals, seventh seed and later wild card Dennis Hooper in the semifinals before edging out Lopez in the final.

This year’s Super G took on a Spartan style look. Conner, a 37-year-old Marine Corps veteran liked the new challenge instead of it being indoors and just an advanced obstacle course.

“Pretty much the trick to winning was making sure you got everything right, no mistakes and stay focused. But you definitely got to have endurance. It’s rough,” said Conner, who served from 2002-09 in motor transportation. He sustained T9 injury in 2007 from a blast in Iraq and wasn’t paralyzed until 2010. “I think course-wise last year was harder because there was more obstacles, more things you had to really, really focus on, but I think this course was more of straight-up speed and muscle. Just definitely made some really interesting racing.”

First, they had had to pick up an Atlas ball and drop into a trash can. Then, they moved on to the rocky road – a pit filled with sand, gravel and big chunks of rocks they had to wheel their way through. Next came the spear throw, where athletes had to throw a spear and get it to stick in a haystack. Then, there came the Hercules hoist, which forced competitors to raise a 35-pound sandbag up to the top of a rig and then bring it down slowly. They then had to navigate a bumpy trail. Then they took the Big Daddy ramp, a balance beam-like ramp only wide enough for their wheelchairs to the snake pit where they had to do a 360 degree-turn before using a robe to pull themselves up an 18-degree ramp. From there, competitors had to raise an American flag to the top of a flagpole, then wheel themselves back down onto the podium to salute the flag.

Athletes received a 5-second penalty if they didn’t make the spear throw and they had to complete each task to advance. If they didn’t complete a task, they were disqualified.

Fourth-seed Terry Rock (Navy) and fifth seeded Anthony Drees (Army) faced each other but each were disqualified for missing the 360-degree turn, as well. That left an empty spot, so organizers decided to have Hooper and Brookins, who each completed the course but lost to their opponents, vie for the last semifinal spot. Hooper defeated Brookins to make the final four.

That spear throw penalty Conner nearly cost himself against Hooper in the semifinals when he incurred a 5-second penalty for missing his first spear throw. So after he missed the throw, he had to sit, wait and watch for five seconds while Hooper continued. Conner stayed ahead of him though and ended up winning that race. He didn’t make that mistake again and knocked off Lopez in the championship.

Fans and other wheelchair athletes lined 4th Street Live! on the sides, at restaurants and on walkways above to check out the rugged obstacle course. This year’s top eight competitors – all division winners of their obstacle course known as slalom – squared off against each other.

“It lets more of the crowd come in so more people get to see what we’re doing, so the exposure gets out so more veterans who may not know what’s going on or may not have an idea,” Conner said. “And then for all the kids, we were signing autographs this morning. Everything was great, so all the crowd, it pumps us up. So it helps us get in that motivated mood to go pound ourselves.”

A Navy veteran, Lopez, 49, liked the new format, too, for the most part. He’s advanced out of the obstacle course known as slalom and made the Super G each of the last 15 years. It actually marked 21 years since his L2-L3 injury on Tuesday.

“I like the outdoor event. It gets more people involved. It gets more people seeing the event. It was fun. I dig the energy,” said Lopez, who served from 1992-97 as a boatswain and was injured from surgery. “Eh, you know, this one is more of a sprint. The other one was more endurance and speed, which I like better in the end.” 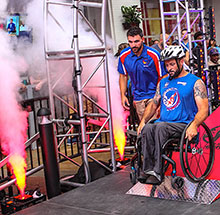