Traditionally, Thanksgiving is a time to reflect on the many things to be thankful for and to gather with family and friends, enjoy a hardy meal and the big football game.

While this normally takes place at a family home, for many service members, Thanksgiving is celebrated in a foxhole, at sea, flying combat patrols over enemy territory or any number of hot zones around the world.

Deployed service members might not be able to be home for the holidays, but, in the spirit of adapting, overcoming and improvising, the men and women of the military go to great lengths to bring some holiday cheer to their corner of the world.

The folks at VAntage Point reached out to some veterans and asked them to share stories and photos of their deployments during Thanksgiving. Here are just a few.

Anthony Schmiedeler: “I spent two Thanksgivings in Fallujah and they weren’t bad at all. You had your brothers to the left and right which might as well be family. And the leadership did everything they could to give us a proper Thanksgiving meal with all the fixings. I’m grateful.”

Stu Seashols: “The Navy cooks made sure Thanksgiving and Christmas dinners were extra special back in the 60s, and we did have our buddies that were just as homesick to share that, too! I SURVIVED!”

Valerie Boyle O’Connell: “I spent many Thanksgivings away from home, either state side or overseas. Sure, it wasn’t like home, but you make the best of the situation and enjoy it with others in the same situation as you are. I always enjoyed spending them with my military family!”

Richard Palmieri: “I spent two in Iraq. The guys next to me are more family than my family. The chain of command did everything to give us a great meal. It was probably some of the best holiday memories I have. Good times.”

Robert Mejia: “1952 in Korea. After getting off the truck, it was a cold snowy trek to the corrugated hut where they served chow. One piece of turkey, one large spoon of lumpy mashed potatoes, one spoon of thick gravy with gizzard bits and one of corn. One slice of bread. It was lukewarm, but it was good. And hot coffee. And I was thankful for it. As I ate, my memories of home at my mother’s table gave me a greater appreciation for everything we had at home and what the poor South Koreans did not. But they have it now. That year molded my character.”

Francis Bilek: “I remember Thanksgiving Day, 1971. Our unit, 1/327th Infantry, 101st Airborne Division, was waiting on the helipad in Da Nang for Chinook helicopters to take our unit back to Camp Eagle, about 60 miles north. One Sergeant was lying on the ground. He was shivering, and the whites of his eyes were yellow. I told someone in his squad they had better get a medic. The guy was really sick. Then the rain came. Severe downpour for about an hour. I sat on my rucksack with my feet off the flooded ground. The rain stopped, and the sun came out. Someone came around and said the guy had hepatitis. There was only enough hepatitis vaccine to do the guys that slept in the same bunker with the guy. They had talked about hepatitis shots for the whole unit. The first Chinook finally took off filled with soldiers. Ten minutes later, I heard on the radio. ‘Lost contact, lost contact.’ The helicopter had been shot down with 23 on board. About an hour later, I was riding on another Chinook helicopter back to Camp Eagle near Hue, Vietnam. Just stare out the window and tell yourself, ‘No, a bullet is not going to rip through the floor.’ That is what I did on Thanksgiving Day, 1971.”

Karen Annette Tripp: “I was deployed with the Hawaii National Guard in Balad, LSA Anaconda, Iraq from 2004-2005. I distinctly remember Thanksgiving Day as I had a 12-hour gate guard duty for the flight line. They brought us plates from the DFAC, loaded down with a little bit of everything! It sure did brighten that day.”

Lawson Pride: “Korea 1967; Vietnam 1969. All I remember is that the mess halls both times tried their best to give us the nicest, old fashioned Thanksgiving dinner with all the trimmings that they could. Wasn’t the same as my Mom but I was still thankful … and wishing I was back home.”

John Stevens: “My first 4 years while in the US Air Force (enlisted) was spent stationed at Ramstein Air Base near Kaiserslautern (a.k.a “K-Town”) Germany. So, I spent four Thanksgivings, four Christmases and four New Year’s over in Germany when I was younger.”

Patrick Tracy: “Ya buddy! Nothing like birthdays, Thanksgiving and other holidays with a nice c-rat meal (yum yum) beef and rocks. All you old timers know what I mean. Enjoy them dinners boys. I hear MREs are a lot worse than c-rats ever were. SEMPER FI. People should know it’s not home cooking for you guys every day.”

Master Chief Yeoman (SS/IDW) Ivan Rivera, Jr.  “This was taken on Thanksgiving Day 22 November 2012, during my 15-month IA deployment to Camp Lemonnier, Djibouti, Africa. The Chief Petty Officers Mess assisted the galley, a.k.a. DFAC, in preparing the meal for over 4,200 sailors, soldiers, Marines and airmen on the camp. We grilled 30 whole pigs, 28 turkeys and 25 ducks in this homemade fire pit. Afterwards we all went to the galley and served the troops for 3 hours. It was a hit and totally unexpected. I am seasoning the pigs with a dry rub of my own concoction.  At the time the photo was taken I was a Senior Chief and had just over 24 years of active duty service.”

Joined the VA in December 2013 and is on the Veterans Experience Office team. Tim, a Chicagoland native enlisted in the Marine Corps straight out of high school. As an intelligence analyst he deployed to Al Anbar province, Iraq with Marine Heavy Helicopter Squadron 363 in 2006 and 2008. After the Marine Corps, Tim used the GI Bill to earn a degree in Intelligence Studies from Mercyhurst University in Erie, Pa., and co-founded the university’s first student veteran organization. 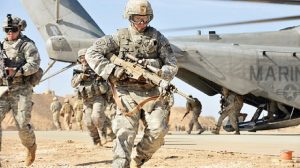