He was a man. Take him for all in all, I shall not look upon his like again

More than just a boss, Editor-In-Chief Tom Fjerstad was often in the editorial trenches with his staff. Helping to craft stories, traveling to on-site events and offering his firsthand experience as a wheelchair user to our mission, he softly led by example.

Tom lost his 16-month long battle with leukemia and passed away peacefully Dec. 9, 2022, at his home in Phoenix, Ariz., surrounded by his immediate family. A Navy veteran, Tom was 63.

Born Dec. 16, 1958 in Litchfield, Minn., Tom joined the U.S. Navy out of high school and spent four years working as an aviation electronics technician, flying aboard a Lockheed EP-3 Orion out of Rota, Spain. He later became a recruiter for the naval reserve in Minnesota.

It was during that time that Tom sustained a level T2 spinal-cord injury (SCI) in a 1989 car accident on his way home from the recruiting office. This is where he would begin a long and impressive history with Paralyzed Veterans of America (PVA) and eventually become the ninth editor-in-chief for Paraplegia News (PN).

Tom’s time with PVA started with the 1990 National Veterans Wheelchair Games (NVWG) in New Orleans. He was eight months out of rehabilitation from his SCI and visiting the Crescent City, where the NVWG happened to be taking place.

“If there’s a better venue to introduce the newly injured to life’s possibilities and do it in such a fun and positive way, I don’t know what it would be,” Tom wrote in Much More Than A Competition for the August 2021 issue of PN, S’NS’s sister publication.

Tom was integral in starting the PVA Minnesota Chapter and became its first president in 1992. Current PVA National Treasurer Tom Wheaton, who was named the chapter’s sports director and later treasurer, says Tom was excited about representing the chapter at the 1993 NVWG in San Antonio.

“So, we all had khaki slacks, we all had polo shirts,” Wheaton says. “There were six of us who were the initial team from Minnesota to represent the brand-new chapter at the time, and because we hadn’t experienced the wheelchair games before, we were just beside ourselves as to all the different disabilities that were out there, the way it was organized and coordinated with hundreds of other veterans. And we just came away from that week just astounded as to what we could do. And we learned more, it wasn’t just about the sports. It was interacting with others about how you live life in this new reality of paralysis. We came back to Minnesota just being energized and so excited about promoting that.”

In 2013, Tom was appointed deputy editor and then took over for the retiring Richard Hoover by becoming PVA Publications’ ninth editor-in-chief.

His firsthand experiences as a veteran with SCI helped the staff create well-researched and developed articles to better serve the readers of both PN and SPORTS ’N SPOKES.

Tom also understood the power of sports and recreation and pursued many of those activities in his spare time and at the NVWG.

A competitive bicyclist who raced prior to his injury while he was stationed in Spain, some of Tom’s other interests included handcycling, trapshooting and scuba diving.

His passion for scuba diving deepened when he had the opportunity to help another PVA member, Joe Zappa, experience a dive in 2017. Zappa had been diagnosed with amyotrophic lateral sclerosis, and his final wish was to scuba dive with his wife, Diana, and then-14-year-old daughter.

Even more impactful was Tom’s Dec. 7, 2019, dive on the sunken U.S.S Arizona (BB-39) in Pearl Harbor, Hawaii. He was invited by the National Park Service to assist in tasks related to the wreck’s preservation, including testing oil-repelling materials on the oil that continues to leak from the iconic battleship.

Tom is survived by his ex-wife and caregiver Cindy Mazanyi and their twin 25-year-old sons, Ben and Noah.

His leadership and friendship will be greatly missed.

In lieu of flowers, consider making a tax deductible donation to Paralyzed Veterans of America or Lifewaters in the name of Tom Fjerstad. 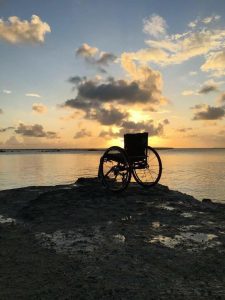