At the Hall of Flame Museum of Firefighting in Phoenix, motor rally (trivia) participants avoided the Phoenix heat while exploring the museum, which houses more than 130 restored original wheeled pieces and thousands of smaller artifacts dating from 1725 to 2006, all while answering trivia questions about Arizona. Players also rolled a large wooden die at five stations to get as many points as possible and drew playing cards at five other stations to get the best poker hand.

Although Paralyzed Veterans of America (PVA) Southeastern Chapter member Cindy Todd of Augusta, Ga., didn’t have time to study up on her Arizona facts, she still enjoyed the experience at just her second Games. She says the questions last year in New York were more focused on the immediate area, and this year the questions were pretty difficult.

“Where they asked about which famous comedians attended ASU [Arizona State University], I’m like, I didn’t know comedians went to college,” she says, laughing. There were two possible correct answers: David Spade and Jimmy Kimmel. “Looking back at them, I don’t think I could have prepared for them. They were not questions that if you research trivia facts or facts about Tempe [Ariz.] and Phoenix or Arizona, most of those questions are not in there. You would just have to be lucky to have known some of these things. I guess that’s the great equalizer.”

The 36-year-old Army veteran, who served from 2007 to 2008, sustained a spinal-cord injury (SCI) stemming from a 2007 incident that involved another soldier who tried to snap her neck. Years later, as her body started breaking down, an MRI revealed the damage that had been done and surgery followed, leaving Todd a high-functioning level C2.

Todd says she likes competing in motor rally because of the academic aspect.

“Most of the Games are all about physical stuff, and I still have a lot of limits,” she says. “Yesterday, I did a few things and my body kind of reacted negatively to the little bit that I did. So, I had to go and put myself to bed pretty early. But stuff like this I can do and still enjoy it and it doesn’t cause me any kind of physical distress.”

Todd also took time to admire the vehicles and memorabilia on display as she went from stop to stop.

“I have a soft spot for firefighters and first responders as a whole, but just history, as well,” she says. “Just seeing all the historical vehicles and the little write-ups about each of the people who’ve lost their lives fighting, it shares a little bit of their story, so they’re not forgotten. It’s cool. It reminds us how our brother[hood] and sisterhood expands further from just our military. I feel like even the more civilian aspect of that first responder unit. I feel like we’re a part of that, as well, and they’re a part of us. It’s just so cool to see where they’ve come from. If you look at history, you can also see where you’re heading, so you can see some of that as well.”

In addition to motor rally, Todd was scheduled to compete in power soccer, disc golf and boccia.

“This is quite a feat. My body’s just kind of like, ‘Is it over yet?’ But my mind is just like, ‘Yes, I’m having fun.’ And my poor body’s like, ‘Can we go home now?’ But I am enjoying it,” Todd says. “I’m enjoying meeting new people and seeing my old friends from last year and even seeing more of our chapter members. We’re so spread out, being able to regroup and interact with them is nice, as well.”

“I’m not good, but I have fun,” he says. “I keep saying, ‘Why should I hit that little black thing [the bullseye]? That’s what everybody else is shooting for. Let me go around. Let’s see them match that!’”

The 70-year-old Marine Corps veteran, who served from 1971 to 1974, developed cancer in 2013 caused by Camp Lejeune, N.C., water contamination. Then, in 2014, he had four units of blood leaking in his body that compressed his spinal cord, causing a level C3-C7 SCI. He also has a level L3-S1 SCI that occurred over time.

Fisher has been shooting air rifle for about two or three years. Dressed head to toe in bright orange, the Cleveland resident was all smiles after completing his 60-shot round at just his second NVWG.

“It’s challenging because it’s a rhythm. There’s a certain rhythm and technique you have to master, and I’m not quite there yet,” he says. “I just found something out. When I go to shoot, I tighten my jaw, and when I do that, my muzzle goes up. So, the last 30 shots, I stopped doing that … So, I figured it out. I needed another 75 rounds, but hey, wait till next year.”

He practices about once a month at the Parma Armory Shooting Center in Cleveland and has gotten some tips on how to refine his technique from fellow PVA Buckeye Chapter member Larry Bostic.

“I was taught to take a deep breath, and then as you let it out, at the very end of it, squeeze the trigger,” Fisher says. “I used to jerk it. When you jerk it, the muzzle goes up. So if you squeeze it, it gives you a straighter line. It’s like golf. All these little techniques you’ve got to learn and practice. Just because you know them doesn’t mean you’re good at them. It takes a lot of practice.”

This year, he scored 255 points, which he says is good for him, as he usually shoots in the 190s.

“I’m a very competitive guy. Been that way all my life, and I’ve learned with this disability to just relax and not be so competitive,” Fisher says. “Like the guy next to me, he was struggling a lot. A lot. And I just told him, ‘You’re rushing yourself. Slow down.’ We’ve got like 40 minutes left and he’s trying to get through his last 20 shots, and he’s complaining, like, ‘God, I can’t get this in the black.’ Slow down. Once he did that, he started getting closer to the center, and after a while he started getting it. I like to help other people.”

Fisher also was scheduled to compete in bowling, softball and boccia at this year’s Games.

“I think next year I’m going to try the air pistol. Work on that, see if I can get into that,” he says. “I like to try something new.”

The NVWG is co-sponsored by Paralyzed Veterans of America (PVA) and the Department of Veterans Affairs runs through July 12. For information, visit wheelchairgames.org and follow PN Online on Facebook, Twitter and Instagram for updates. 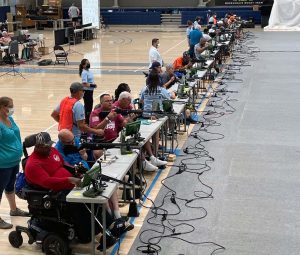