U.S. Navy Veteran, Ian Singleterry, talks about his life changing motorcycle accident, how he deals with PTSD and his love of WCMX

Losing a limb was mild compared to the daily struggles of post-traumatic stress disorder (PTSD) that Ian “Doc” Singleterry faces every day. Singleterry joined the Navy in 1991 after the Gulf War broke out. From 1991 through 1995, he was in active duty and from 1995 through 2004 he was in the reserves stationed with the Marine Corps as their medic. Being a medic was something that Singleterry always wanted to do.

On Monday, September 20, 2004, Singleterry received a call from the Navy Reserve center calling him for duty. Excited, he called his Marine unit and told them he would see them on Friday. Before he left, he was hoping to get a good motorcycle ride in. He called his group and asked them to join him for “one last ride.” The next day, September 21, 2004, he and his group were riding, enjoying the ocean breeze in Long Beach. As they went through a tunnel, the road turned into a slight right with an uphill climb. Singleterry hit a foreign object in the road and his bike slid. Attempting to recover, he hit a curb and flew, hitting a tree and then flying another 200 feet before he finally came to a stop.

As a result of his accident, Singleterry had a ruptured spleen, multiple open wounds with broken bones to each leg, a punctured lung, lacerated kidney, traumatic brain injury and a severed femoral artery. Initially, the doctors tried so save both of his legs. The shunt in his right femoral artery failed, which led to a below the knee amputation. However, that was not the end. Another femoral artery failed, this time near his hip, which resulted in further amputation with a residual femur of less than three inches. Although he completely lost his right leg, his left leg was able to be saved with two plates and 19 screws in the left tibia and a partial fusion around his ankle. Over the years he has tried with a prosthesis, but the pain in his left leg, back and shoulders wasn’t worth it. Now, Singleterry gets around on his wheelchair.

“I was in a medically induced coma for the amputation of my leg, but when I came out I was OK with it,” he says. “Being a corpsman, I understand life over limb. I became a corpsman the long way, so I was very prepared for the reality of being an amputee. Being an amputee is the easy part, the PTSD is the hard part.”

His PTSD is a monstrous battle that he fights daily. In his case, he has many ways to help get his mind at ease.

“PTSD strikes in many ways and every situation is different,” he says. “I tend to go be alone until I can calm down. Sometimes I’ll grab my camera and go shooting, other times a day in the skate park [helps]. It’s a constant battle.”

Singleterry grew up skating and surfing, and after recovering from his accident he got into adaptive sports. He got involved in the wheelchair motocross (WCMX) community a long time ago but didn’t give it a try himself till about three years ago.

“Since I grew up skating around Long Beach, it was almost natural to start WCMX,” he says. “I had played many adaptive sports over the years, and those chair skills translated to WCMX easily. It does take some different mental processes to drop in [a bowl] or grind a rail. However, it is a blast once you start carving it up at a skate park.”

To him, dropping in the big bowls is the hardest part.

“The bigger the wall, the harder it is to convince yourself to roll up and drop,” he says. “For me, part Sailor, part Marine and 100% Devil Doc, I am a little bit more of an adrenaline junkie than most.”

The adrenaline junkie in him showed when he competed at the 2018 WCMX World Championships in Fontana, Calif. in April. His runs were fast. He hit every rail and dropped into the bowls as much as he could. Singleterry was the oldest athlete to compete. At 47-years-old, he took home third place in the Division I category.

“I have always enjoyed sports and action. I get into a rhythm and just flow. [For me] it’s also setting an example to others, showing the that you don’t have to let life roll by with you sitting on the sidelines,” he says.

With his ambition to show other people with disabilities that life is still worth living, he is currently working towards starting a non-profit that helps get people with disabilities out of their home and comfort zone and find something they are really passionate about. “Always Rolling” is in the works, but Singleterry’s goal is to have it running as soon as he can, purchase a trailer, pack it full of equipment and travel the U.S. to help others find their new passion.

“I have wanted to do this since 2011. I want to be able to grab all my sports chairs and photography gear and hit the road to push people out of their homes [and try something new],” he says. 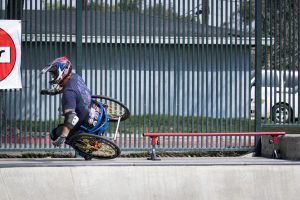