While exercise can come in many forms, researchers at the University of Illinois, have recently been studying the feasibility and safety of high-intensity interval (HIIT) training-based handcycling in people with SCI. Two of those researchers, Kellie Halloran, BS, MS, and Joey Peters, MS, PhD, discussed their findings during a breakout session at Wednesday’s final day of the 2022 Paralyzed Veterans of America Healthcare Summit + Expo at the Omni Dallas Hotel in Dallas.

“In the general population, we know that physical activity can lead to reductions in these high rates of cardiometabolic disease, but in the population with spinal-cord injury, results have been less effective and this is likely due to various physiological barriers associated with spinal-cord injury, injury concerns and then also psychological barriers,” says Peters, adding that over 50% of people with SCI present signs and symptoms of cardiometabolic disease, making it the number one cause of death for that population.

Peters says one physiological barrier to exercise is associated with changes in the autonomic system, which can lead to a reduction in cardiac output capacity, or the ability to pump oxygen-rich blood to the muscles, especially when someone with SCI is exercising.

“We need to get a lot of oxygen to the muscles to keep prolonging exercise and attain those positive benefits for exercise, so if we have reduced capacity, if we’re trying to prolong exercise and engage in the amount of exercise needed to attain benefits, we may experience early muscle loss and fatigue and it may not be possible to sustain those bouts,” Peters says. “So, when we’re engaging in exercise, especially for an individual with reduced cardiac capacity, we need to find exercise modes that can kind of maneuver around those low cardiac output capacities that we see in a person with spinal-cord injury.”

Halloran says other common barriers to exercise are shoulder pain and injuries. She says up to 72% of wheelchair users report experiencing upper extremity pain, most likely due to overuse from the repetitive motion of pushing a wheelchair.

“As we’re evaluating these potential exercise regimens, we need to find a balance between, not only as Joey discussed, ensuring they are achieving the correct cardiovascular benefits for this population, but also making sure that as we’re recommending these exercises, we’re not increasing the risk of injury to their shoulders or to the rotator cuff,” she says.

Peters says psychological barriers include a lack of readily available accessible exercise options and limited evidence of exercise’s effectiveness in people with SCI.

“So, even adhering to physical activity guidelines for a prolonged period of time, we’re not always seeing those positive adaptations that we see in the general population,” Peters says. “This has led this population to look at exercise as unenjoyable and ineffective, thus increasing their risk for engagement in sedentary behavior.”

HIIT, which involves short bursts of intense exercise followed by short, low-intensity active recovery periods, has been recommended by health and fitness researchers because of its ability to produce positive cardiovascular results, while allowing some musculoskeletal recovery during the low-intensity portions to prevent early-onset muscle fatigue. In addition, Halloran says in a variety of populations, HIIT has been found to be more enjoyable than traditional modes of continuous exercise, which is particularly important for SCI clinicians who want to recommend an exercise protocol that will be followed long-term.

In their study, Peters says the researchers established a new protocol using a recumbent handcycle, a form of exercise that hadn’t been previously studied. They also examined how people with SCI perceived the activity and if they’d stay engaged in it long-term, as well as the risk of shoulder pain or injuries, which was evaluated by measuring shoulder-loading and applied force patterns on the handcycle’s handles.

“We wanted to make sure that even if we created a protocol that was metabolically effective and was perceived well by this population that is wasn’t going to lead to shoulder injuries long-term,” Peters says.

The researchers brought 20 participants with paraplegia into the lab for three separate exercise protocols using a stationary handcycle trainer. Participants were age 18 to 45, were physically active, had a neurologically stable SCI and were at least one year post-diagnosis.

The first protocol was an incremental test to exhaustion, where participants started cycling at 30 watts and increased by 10 watts every minute until they couldn’t handle anymore. The researchers recorded their peak power output and peak VO2 (maximum oxygen consumption rate) and used that to tailor a HIIT session for each participant.

For the third session, participants performed a tailored moderate-intensity continuous training session, where they cycled at 45% of their peak power output until they’d reached a workload equivalent to their HIIT session.

In all measured variables, the researchers found HIIT led to a greater cardiometabolic/cardiorespiratory response, even during rest periods, and more effectively strained the cardiometabolic system compared to a prolonged moderate-intensity session.

As far as participants’ perceptions of the activity, Peters says the researchers found HIIT was more enjoyable and there was no difference in self-efficacy (the belief you can engage in a specific behavior), feelings of accomplishment or other psychological outcomes.

Lastly, the evaluation of shoulder loading and risk of shoulder pain or injury showed that forces in all directions were higher during HIIT than during moderate-intensity exercise.

“We knew during HIIT, they would be propelling at higher power outputs, they’d be pushing harder, so the forces at the handle would be higher,” Halloran says. “This could indicate that there are some increases in shoulder joint loading during HIIT, so, because of that we wanted to look into, OK, how are they applying these forces? Are they applying them efficiently? What’s going on throughout the different protocols.”

To answer those questions, the researchers calculated each participant’s mechanical efficiency at six time points for both HIIT and moderate-intensity. The results indicated that amount of force participants were applying to continue to propel wasn’t changing throughout the protocols.

“This is encouraging because we would expect that as they get fatigued, their propulsion style is going to kind of degrade and they’re no longer going to be propelling efficiently, but that’s actually not what we’re seeing here,” Halloran says. “So, even though during the HIIT protocols, they’re cycling at higher intensities, it appears that if they are getting fatigued is not changing how they’re propelling the handcycle.”

There were some limitations, Peters says, including that the study was a within-subject design and wasn’t longitudinal.

“We can’t make any kind of claims that HIIT is going to lead to long-term improvements in any of our variables, but as a within-subject design, our results appear promising and we’re going to use them to begin developing longitudinal studies.”

In the future, the team hopes to look at the differences in physiological responses to HIIT between male and female subjects with SCI, as well as look into joint contact forces and begin to calculate what is really happening to the shoulder.

In addition, Peters says because the subjects were physically active, the study might not be representative of the general SCI population. However, because they were establishing a new protocol on a new exercise system using HIIT, the researchers wanted to make sure there wouldn’t be any cardiovascular complications before bringing the system to the general population.

“We didn’t observe any of those, so now we’re really excited to translate this project to the general population of people with spinal-cord injury,” Peters says. 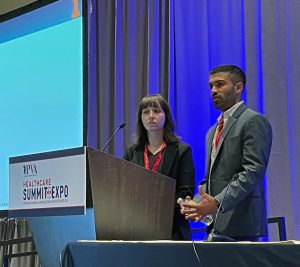