To help celebrate, here are some interesting facts and trivia about the Marines.

The Marine Corps was founded in a bar

The U.S. Marine Corps was born on November 10, 1775, the day the Second Continental Congress passed the Continental Marine Act of 1775, ordering “That two battalions of Marines be raised.” The Continental Marines disbanded in 1783 and was formally reestablished in 1798. The first Marines enlisted at Tun Tavern in Philadelphia, which is considered the birthplace of the Marine Corps.

While the Marine Corps was founded on 10 November 1775, the first “formal” Birthday Ball took place in Philadelphia in 1925.  Guests included Marine Corps Commandant John A. Lejeune who started the birthday ball tradition and read his 1921 Marine Corps order 47, the Secretary of War (known today as the Secretary of Defense), Dwight F. Davis and a host of statesmen and elected officials.

Prior to the Ball, Gen. Lejeune unveiled a memorial plaque at Tun Tavern, the birthplace of the Marine Corps.  Then the entourage headed for the Benjamin Franklin Hotel for an evening of celebration.

The first retired Marine to ever receive an honorary promotion appeared in a Stanley Kubrick movie.

In the film, Full Metal Jacket, former Marine drill instructor and Vietnam veteran, R. Lee Ermey, who had been hired for the film as a technical advisor, would soon become a household name after his unforgettable performance as Senior Drill Instructor, GySgt. Hartman.

Ermey filmed a tense 20-minute reel of himself in character dressing down and squaring away the movie’s extras, without repeating himself. When director Stanley Kubrick saw the video, he recast Ermey for the role on the spot.

The fictional Hartman became perhaps the most famous gunnery sergeant in the history of the Corps. Ermey retired as a Staff Sergeant, and in 2002, the Marine Corps granted him an honorary promotion in accordance with the rank for which he is most associated. Ermey—who passed away on April 15, 2018—is the first retiree in the history of the Marines to receive such an honor.

The Marines’ hymn refers to the battle of Chapultepec

The Marine Corps’ Hymn famously begins, “From the Halls of Montezuma…” This refers to the Battle of Chapultepec in 1847, in which U.S. Marines conquered Chapultepec Castle in Mexico City and subsequently occupied the city as part of the Mexican-American War.

The battle is also famous (according to Marine tradition) for the establishment of the “blood stripe,” a red stripe sewn into the trousers of the uniform commemorating the Marines killed at Chapultepec.

The nickname, Leatherneck is historic

In 1798, the Marine Corps began issuing “one stock of black leather and clasp” to Marines. The item was worn to protect their necks when fighting with swords. Today, the standing collar on the dress coat of the Marine Corps uniform is a vestige of the leatherneck tradition.

No Marines on D-Day

Amphibious warfare or storming the land by sea are one of the Corps founding missions, and yet the Marines are largely absent from the Normandy Invasion—history’s most famous amphibious assault. Why did the Army get the job?

More people. The Army had 89 divisions; the Marine Corps had six. And almost all of the Marines were fighting in the Pacific campaign. But there was a contingent of Marines on board the U.S.S. Texas (BB-35) who were held back from the invasion, most likely because of the ongoing rivalry between the Army and the Marines. 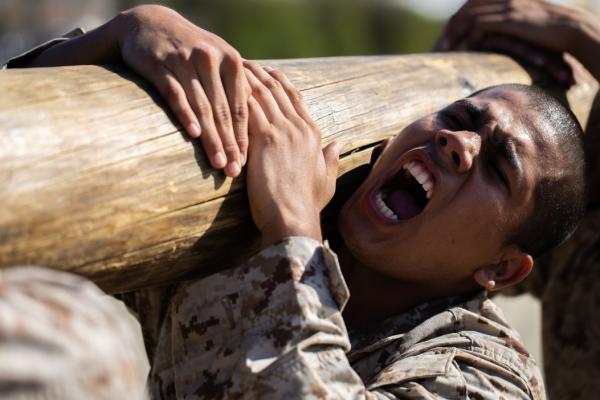 Because the leaders of the Allied Forces were Army generals, there was no chance they intended to share the spotlight on the biggest operation of the war. Even when the invasion looked grim, the Marines, who watched from the decks of the U.S.S. Texas, were never unleashed. As journalist W. Thomas Smith has written, the leadership didn’t want headlines the next day to read “Marines save Rangers at Normandy.”

Marines assigned to the Office of Strategic Services, forerunner to the CIA and U.S. Army Special Forces, were on the ground, however, secretly working as observers of the invasion and facilitators for Army paratroopers who were jumping behind enemy lines.

When the fast food wars are fought, a Marine will come out on top

In the 1993 film, Demolition Man, Sandra Bullock’s character refers to the Fast Food Wars, of which only one restaurant survived—Taco Bell. This is probably in no small part because the founder of Taco Bell was Glen Bell, a Marine who served in the Pacific Theater in World War II.

Famous Marines who aren’t famous for being Marines

Before he became famous for co-hosting The Tonight Show, Ed McMahon was a Marine fighter pilot with six air medals and 85 combat missions under his belt.

While Drew Carey was a reservist in the Marines and looking for a way to make a little extra money, he tried stand-up comedy—and it worked.

Before he was a Ghostbuster, Ernie Hudson had a short stint in the Marine Corps.

Actor Dale Dye has an impressive resume’ of movies under his belt, but prior to acting, the Missouri Military Academy graduate served in Vietnam with the Marines.

Before patrolling the California highways on the 1980’s TV show, CHiPs, actor Larry Wilcox served in the Marine Corps and was part of the Tet Offensive.

Robert Ludlum’s time in the Marine Corps no doubt informed his novels about a super-spy named Jason Bourne.

Millions of TV viewers knew him as B.J. Hunnicutt, the straight-laced surgeon in M*A*S*H, but before his duties as a U.S. Army doctor, Mike Farrell served in the Marines shortly before the start of the Korean Conflict.

You may remember George C. Scott for his role as Patton, but before that he served in the Marines.

Many know actor Adam Driver for portraying the villain, Kylo Ren, in Star Wars: The Force Awakens, but before that role, Driver enlisted in the Marine Corps shortly after the attacks of September 11.

The phrase, A Few Good Men

On March 20, 1779, Captain William Jones of the Continental Marines placed a recruiting advertisement in the Providence Gazette: “The Continental ship Providence, now lying at Boston, is bound on a short cruise, immediately; a few good men are wanted to make up her complement.” He’s been recruiting Marines ever since. 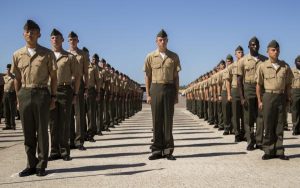