The patriotic instinct of Andrew “Andy” Soule led him to pursue a career in the U.S. Army, after witnessing the September 11 attacks. After that, the decision to serve his country was an easy one.

Soule felt an obligation to protect and defend his country. He was ultimately deployed to Afghanistan with the 173rd Airborne Brigade. Despite being aware of the dangers the role entailed, he never thought that his journey would come to a halt due to injury.

He was on patrol in 2005 when a roadside Improvised Explosive Device (IED) detonated near his Humvee and drastically changed his life. The explosion was fatal to the man right beside him and caused unimaginable injuries to Soule’s legs that led to double amputation.

During his time in rehabilitation, Soule was introduced to adaptive sports. He attended a cross country Nordic skiing clinic that was hosted by the Wood River Ability Program in Sun Valley, Idaho. He immediately fell in love with the sport. He adapted to being in the cold very quickly and soon loved being in the snow.

“Post-injury, Paralympic sport felt like a natural fit,” Soule says. Soule credits sports director, Marc Mast, for his guidance and support during recovery. For a time after his injuries, Soule was lost and didn’t know how to carry on with his life after the traumatic experience of amputation.

Soule started training and showed incredible promise for the sport of cross country skiing. He was quickly welcomed by the U.S. disabled ski team and not long after he was traveling globally and competing in World Cup events where he was able to fixate his skills along the way with dedicated practice and a sharp sense of discipline. When he discovered Biathlon, he knew it was something he had to try. The combination of his shooting skills and his love of snow immediately attracted him.

“I had a base of shooting skills already,” Soule says. “I had to learn the particulars of biathlon shooting and it’s quite a steep curve in some ways, but I think I picked it up fairly quickly. My shooting experience growing up had been casual target shooting and then the military. In biathlon there is more emphasis on the individual shot.”

During his first Paralympic Games in Vancouver in 2010, Soule made America proud and became the first U.S. biathlete to win a Paralympic medal. He took home bronze during the 2.4km sitting pursuit. The international platform served him up on a platter of consecutive successes that helped motivate him to train harder and set high expectations for the next Paralympics. During Sochi 2014, Soule tried his hardest to clinch another medal, but ultimately fell short.

Soule had a good number of races under his belt going into PyeongChang 2018, so competing has become natural for him. Soule knows that there are so many aspects of a race that he’s unable to control, so he doesn’t let the pressure get to him.

“For Cross Country and Biathlon there a lot of pieces that I’ve been working on in the last four years,” he says. “That encompasses both psychological, nutrition, all sorts of technical work, as well as just straight physical training. I just focus on performing every individual task in ski racing and in Biathlon the best I can.”

For the first of his events, Soule seemed drained and discouraged, but he played the consistency game he knows so well. He put out a great technical show to the spectators at the Alpensia Biathlon Center.

The veteran never gave up, and despite the abnormally warm weather conditions and the fierce competition, he pushed through. He didn’t let anything affect his strong sense of dedication, even though he was one of the last ones on the course to cross the finish line.

On Wednesday, March 14th Soule unleashed a powerful surge and when he crossed the finish line he grabbed his first Paralympic gold medal, just one day after winning Bronze in the middle-distance Biathlon race. You could see the nerves in his body language. He thought he earned silver, but in the end, he was awarded with his very first gold medal.

“It’s so exciting, and it’s all due to so many hours and years of preparation and work by so many people, not just me, but the teammates, coaches and technical staff,” he says. “And from wonderful support from family and friends.”

Story published with permission of the Wheelchair Sports Federation. ©2018 All rights reserved. 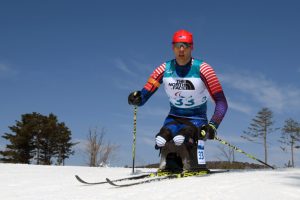