A pickleball exhibition helped kick off the first day of the National Veterans Wheelchair Games in Tempe, Ariz.

Featured as an exhibition sport this year, pickleball combines elements of tennis, table tennis and badminton and is played on a court about one-third the size of a tennis court. Along with wheelchair basketball and power soccer, it served as one of the opening competitions for the Games, which are co-sponsored by Paralyzed Veterans of America (PVA) and the Department of Veterans Affairs and run through July 12 at venues around the Tempe/Phoenix area.

The NVWG gave Army veteran Calvin Ingram his first chance to pick up a pickleball paddle, but the PVA Southeastern Chapter member quickly learned the game’s basics and enjoyed trash talking several other PVA Southeastern Chapter members who played on the opposing team. He also learned how easy, fun and exciting pickleball can be, and he might try to find a group to join when he goes back home.

“I didn’t know the paddle would be so light. I expected it to be more like tennis,” Ingram says. “But it’s different. It’s easier than tennis. And the speed definitely keeps you moving. The anticipation, especially when it’s your turn to serve the ball, you know, it’s a burst of energy.”

This is the eighth NVWG for the 62-year-old, who served from 1978 to 1982 and sustained a level T12 incomplete spinal-cord injury (SCI) from a gunshot wound while he was being robbed in June 1993. He enjoys getting to explore different cities and seeing old friends.

“Thanks to the PVA and the National Veterans Wheelchair Games, it made a big difference in my life as far as competing against other athletes because I’d never done it before,” the Atlanta resident says. “I try to come every year for the camaraderie, the socializing, traveling, food, sightseeing, yes, everything.”

This year, he’s also competing in table tennis, 9-ball billiards and wheelchair curling — another first-time sport for him.

“I watched that on the Olympics and the Paralympics … and I put it my head, ‘I can do that, all right,’” Ingram says. “I’ll be challenging myself, put myself to the test. Like I say, just do it, and that’s what I do.”

PVA Mid-Atlantic Chapter member Christopher Dominick also took the opportunity to test his pickleball skills for the first time and even tested the limits of his everyday wheelchair.

While stretching back for the ball, Dominick went back a bit too far and fell backwards out of his chair. But he still feels like he learned a lot about the game and wants to try it again sometime — with a proper sports chair like he uses while competing in citywide tennis tournaments back home in Shelby, N.C.

“I’m an avid tennis player and just thought maybe I could excel at pickleball,” Dominick says. “It’s hard for me to form an opinion because I’m not in the right chair.”

The 50-year-old, who served in the Navy from 1989 to 1993 and was diagnosed with a level T11 SCI 10 years ago, is also competing in field events, adaptive fitness, softball and powerlifting at the NVWG this year. This is his fourth Games, and he looks forward to the camaraderie most of all.

“I was in a bad place trying to accept this paralysis, and the vet games kind of showed me that I can do something. I can be somebody,” Dominick says. 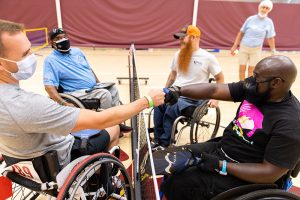