After giving out one major honor in the 2022 Gordon H. Mansfield Congressional Leadership Award, presented to Rep. Jim Langevin (D-R.I.) on Wednesday, Paralyzed Veterans of America (PVA) ended the week by presenting another big award.

This one all had to do with accessibility and accessible design.

“Wow — I wish everything was this welcoming. I’ve got to tell you this is what true inclusion is all about,” says Brown during the morning’s award ceremony. “… The Kennedy Center demonstrates what accessibility and inclusion looks like for everyone and is the reason they lead the country and the world when it comes to accessible design.”

Additionally, the center’s entrances, garages, welcome areas and foyers have built-in ramps, its theater areas — rehearsal and backstage areas, dressing rooms and aisle pathways — all have accessibility designed into them. That includes full-length mirrors, lower tables to put on makeup and accessible pathways.

Inside the theater, seating areas have removable armrests and bariatric chairs. And throughout the center, courtesy wheelchairs are offered to patrons, along with curb-to-seat wheelchair service, accessible cell phone charging stations, accessible restrooms and more. There’s also its latest $250 million renovation project at the REACH, named in honor of late former President John F. Kennedy’s (JFK) aspirational vision of the arts in capital letters, which is a creative open space that has accessibility ramps and areas for visitors from everywhere to see free arts-related shows.

PVA’s architecture team has worked with the Kennedy Center for more than 20 years on improving its accessibility and accessible design. John F. Kennedy Center for the Performing Arts President Deborah Rutter acknowledges it’s made a major difference.

“I am very proud that from the very beginning as we started to go back and look at our facilities, we knew we needed to make every single aspect of the building accessible. So, from the very first theater all the way to the building of the REACH, and now our brand new exhibit in memory of JFK, each piece has been viewed in the lens of accessibility,” Rutter says. “Whether it’s the height size or the slope of the ramp, the Paralyzed Veterans of America has been part of our team.”

Created in 1958 after former U.S. President Dwight D. Eisenhower signed the National Cultural Center Act, bipartisan legislation that created a national cultural center, the Kennedy Center was named as a memorial to Kennedy in 1964 but didn’t open to the public until September 1971 because there wasn’t a funding mechanism.

The Kennedy Center is built on three pillars — presenting, producing and curating world-class art; offering powerful education to people of all ages everywhere; and fulfilling its mandate as a living memorial to Kennedy. 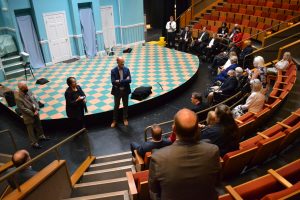