For more than 20 years, Rep. Jim Langevin (D-R.I.) has fought for veterans’ health care and disability civil rights. Now, Paralyzed Veterans of America (PVA) is honoring him with one of its highest honors.

Established in 2015, the award is presented to elected officials who demonstrate strong leadership and unwavering support of PVA’s priorities in the areas of veterans’ health care and benefits and disability civil rights, according to a PVA press release.

After becoming the first quadriplegic elected to Congress in 2001, the 58-year-old Langevin has served in the U.S. House of Representatives for the past 21 years and has become instrumental in helping pass important disability civil rights legislation. Some of that legislation includes the Americans with Disabilities (ADA) Amendments Act that strengthened protections within the ADA, the Air Carrier Access Amendments Act to improve air travel for passengers with disabilities and creating and serving as co-chair of the Bipartisan Disabilities Caucus. He also is a senior member of the House Armed Services Committee and chairs a handful of subcommittees.

“Well, it’s incredibly meaningful. I have such respect for the Paralyzed Veterans of America organization and its members. And it’s been a real pleasure over the years to work with PVA on disabilities issues, trying to bring down barriers and open up doors of opportunity for people with disabilities — especially those that are paralyzed,” Langevin says. “Paralysis issues are near and dear to my heart. I, too, am one of the members in that respect.”

A Warwick, R.I., resident, Langevin was injured in 1980 at age 16 from an accidental shooting at the Warwick Police Department when a gun discharged and a bullet hit him, leaving him with a level C5-C6 spinal-cord injury.

“For me, it’s a true honor to say thank you for what you’re doing there. You’re improving our quality of life, not just for our paralyzed veterans and disabled veterans, but for all people with disabilities,” Brown says. “The mantle that you’ve taken up from your spot actually encompasses not just the United States but the world.”

Langevin plans to retire at the end of the year. But he hopes to possibly keep working with PVA in the future.

“You know, when we’ve been deployed out there and meeting with their members and their staff, they’ve made a difference,” Langevin says. “They’ve really raised the volume on the issue of helping people with disabilities to bring down barriers and open up doors of opportunity.” 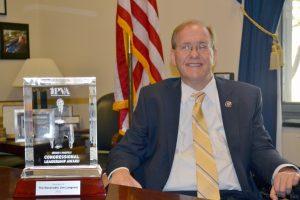