Marine Shapes His Own Second Chance

“Life is short,” he said. “I can’t leave all the negative behind, but I’ve been blessed with a second chance, and I’m not going let that slip away.”

Van Etten joined the Marine Corps after graduating from high school, intent on taking a different path from his parents, who both served in the Air Force. That “stubborn” decision would ultimately help him recover his confidence after he got injured.

He said he worked really hard after losing both of his legs from stepping on an improvised explosive device (IED) in 2012 while serving with the 1st Battalion 7th Marines as a dog handler on his second deployment in Afghanistan.

“That sense of survival is not so much an immediate thing as it is a long-term mental battle,” he said about life nine years later.

Van Etten’s brother, Cameron, showed him a video of a wheelchair lacrosse game being played while he was in rehab, and he said it was then that his perspective started to change.

“I was getting lazy not doing physical therapy every day, and so I started looking for a sport to sink my teeth into,” he said.

After recovering in his hometown of O’Fallon, Ill., he moved back to California to try it.

The ad campaign with Jockey, plus two years of acting in Los Angeles also helped keep him in shape, but things slowed down due to the novel coronavirus (COVID-19) pandemic. Van Etten also lost his mom following a second battle with breast cancer in 2019 and today, he and his wife, Sam, are raising his son, Milo, 2, and are expecting a girl.

“I don’t have stars in my eyes anymore. My life changed forever in a great way,” he said about being a dad.

That doesn’t mean Van Etten is giving up lacrosse — nor is he quitting riding anything on two wheels, since both help him get through his bad days.

“I can’t speak for all vets,” he said. “But Sam understands when I need to go for a ride.”

All it took for Van Etten to get hooked on wheelchair lacrosse was one hit.

“Imagine adding lacrosse to bumper cars. It’s like that,” he said. “After my third practice in the chair, the feeling was a lot more intense than I got trying to play regular lacrosse, and I learned quickly that I was still going to get rocked.”

“Getting players who are excited, athletic and motivated is a lot of what we’re up against as we try to grow the sport, and Chris is all of that,” Lundstrom said.

Van Etten said he did have to get over the stigma that since he wears prosthetics, he needed a wheelchair.

“I was still hard-headed the first year after I was injured about playing any sort of wheelchair sport,” he said. “I had that stupid sense of pride, but when I got rid of that is when I excelled as an athlete.”

“He is fast and so driven, because as a Marine, there is no quit,” said Lundstrom, who sustained a C7 spinal-cord injury in a 2002 motorcycle accident and has played in three national tournaments with Van Etten (2015-2017).

The game itself utilizes regular lacrosse gear, to respect its Native American origins, and is played using outdoor men’s field rules. Out of the chairs, players focus on ball handling and stick skills.

“You do lose some function of your body, sitting down, but anyone can learn to throw and catch,” said Lundstrom.

Implementing a classification system is the ultimate goal, but filling rosters with the seven players needed is a huge challenge. Gear is also expensive, and traveling time to compete is different for each of the league’s soon-to-be 12 teams that range from Houston to upstate New York.

“You can get lost in lacrosse,” said Van Etten. “In the military, you know what you’re training for. When you get out, that purpose is gone. Practicing with this team, I can put 100 percent in and feel like I am getting something out of it.”

Van Etten sees losing his opportunity to serve in the military as something that has provided him more opportunities.

“I miss being a Marine, but I have no complaints about where my life has gone,” he said.

While throttling down open road on his adapted 2017 Harley-Davidson Softail Slim, donated by the nonprofit Warfighter Made on the anniversary of his injury in 2020, Van Etten doesn’t let anything offend him about being legless.

“I am a cripple,” he said. “Using that word doesn’t change who I am as a disabled person.”

Another opportunity came in the form of a role-playing gig he took to help train first responders.

“It was tough, but overall, it helped with some issues I was having, similar to immersion therapy, but it took its toll,” he said. “You’d be surprised how aggressive people can be when they’re trying to save your life.”

During the pandemic, he has taken up welding to satisfy a dream of fabricating his own motorcycle frames, and he started playing the harmonica.

“I was looking for an instrument I could take with me on the bike,” he said.

He and Sam will eventually move back to the Midwest, where he hopes to set up a lacrosse program near St. Louis and find a sled hockey team.

Asked if there was anything he wouldn’t ever try to do?

“I would never wrestle with a grizzly bear,” he said. “I know my limits.”

Check out the next WLUSA/Paralyzed Veterans of America/Wisconsin Adaptive Sports Association webinar on lacrosse skills and drills, scheduled for March 18 at 3 p.m. EST. An introduction to the sport can be found on the WLUSA website: http://www.wheelchairlacrosse.com/ 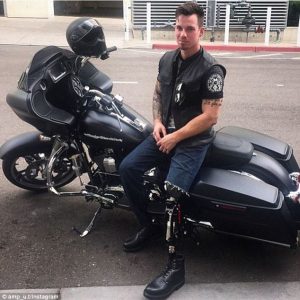