Brown was elected, defeating current PVA President David Zurfluh, from the PVA Board of Directors.

A PVA Florida Chapter member and Marine Corps veteran, Brown, 55, had served as PVA’s national senior vice president since 2017 and was a PVA vice president for five years before that.

“I saw the things that the organization was doing and doing well and had a desire to step up and try and put my assistance behind it and grow the organization and serve our members and those members that are out there but they’re not being served,” says Brown, who served in the Marine Corps from 1985-86 before sustaining a C5-6 spinal-cord injury from a diving accident while serving in Cherry Point, N.C.

“So, for me, it was about really finding those people that are lost and bringing them into PVA. And so, as president, I hope to be able to get the message out further to those people that don’t know they can go to VA [Department of Veterans Affairs] hospitals. They can still become members of PVA.”

A Loxahatchee, Fla., resident, Brown will replace Zurfluh, who has led PVA the past four years as president. Zurfluh is one of only three PVA presidents to have served four or more years — with the other two being Joseph Fox Sr. (2000-04) and Randy Pleva (2004-09).

“David is a great friend of mine. He’s done some great things at PVA. He’s brought stability. He’s brought growth. He’s led this organization in a quiet manner, but with a strong voice,” Brown says. “I’m honored to be his friend. I’m honored to serve right behind him.”

Thomas has been on the executive committee for the past seven years as vice president and also as national parliamentarian.

A Marine Corps veteran, Albertson was re-elected as national vice president a seventh consecutive year, while Jones, an Air Force veteran, was re-elected for a fourth straight year.

An Air Force veteran, Cordova has served on PVA’s finance committee and is currently a member of the field advisory committee.

Negrete, a Marine Corps and Coast Guard veteran, joined the New England PVA Chapter board of directors in 2015, was elected New England PVA Chapter president in 2017 and also serves as the chapter’s national director, communications director and editor of the chapter’s newsletter, CordWord. He also participated in numerous field advisory committee visits in New England and served on the finance committee for the past four years.

An Army veteran, Murray was voted as PVA’s secretary for the third consecutive year.

For more of PVA’s 75th annual convention coverage, see July’s PN magazine and check out the videos on pnonline.com. 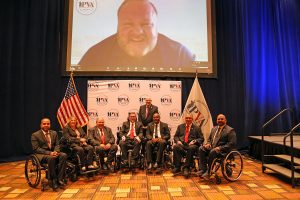