It turned heads – from athletes to onlookers to even Paralyzed Veterans of America’s (PVA) president – late Sunday afternoon and evening at 4th Street Live! in downtown Louisville, Ky.

Adaptive powerlifting took center stage and for the first time in NVWG history was held outdoors. A stage and weightlifting benches, weights and other equipment was brought in, half the street was blocked off and shut down and crowds and on-lookers packed the entertainment venue and brought the energetic atmosphere organizers had hoped.

First-year NVWG participant and Army veteran Alex Trevino enjoyed every second of it. The 26-year-old from Corpus Christi, Texas, loved that crowd and how much energy it gave the PVA Texas Chapter member at the start.

“I mean it was pretty awesome. I could feel the adrenaline. There was a lot of support. The energy here is awesome. I love the energy,” said Trevino, who served from 2014-17 as a light-wheel vehicle mechanic and sustained a T9 injury in a motor vehicle accident Feb. 24, 2017 in Corpus Christi.

“The temperature, you know, inside there’s AC (air conditioning), you’re comfortable, blah, blah, blah. Then, outside you’re hot, you’re sweating but you’re primed, you’re ready to go. I feel like it has its ups and downs. I definitely like the fact that it’s outside because it’s different. It’s a different setting. Everybody’s used to indoor weightlifting, but we’re going to do outdoors, so check it out. If you’re hungry, there’s restaurants everywhere. It’s in a central place. Everybody has no other choice but to pass through when you’re eating if you’re part of this or not. It brings a lot of support.”

Sunday marked the third day of competition for more than 640 registered athletes. They participated in sports including air pistol, boccia ball, bowling, quad rugby, wheelchair basketball, power soccer, powerlifting and swimming. While weightlifting had its spectacle, swimming had an Olympic gold medalist show up at the Mary T. Meagher Aquatic Center in Louisville. Charlie Houchin, an Olympic gold medalist from the 800-meter freestyle relay team at the 2012 Olympics, was on hand to support swimmers.

Meanwhile, at 4th Street Live, a loud and frenzied crowd brought energy. Family members rooted on loved ones, fans watched from nearby restaurants and other wheelchair athletes rolled in to check out their friends.

It certainly helped 31-year-old novice Anthony Martinez. On his final attempt late in the event, the first-year NVWG participant and Army veteran lifted 405 pounds – tying a personal best. Martinez originally set that personal record when he weighed 250 pounds, and now he’s down to 235 pounds. He even tried another attempt at 415 pounds right after that but couldn’t get it.

“I was just super pumped and super amped. I was like ‘I want another lift. I got this. Let’s try some more,” said Martinez, who served from 2005-08 as a parachute rigger and was injured March 17, 2013, in Lemoore, Calif., in a single-car accident.

That atmosphere is what PVA President David Zurfluh, who attended the event, had hoped for.

“I like it a lot because it brings the community in. That’s what we’re all about. We want to show the community what we do,” Zurfluh said. “And the fact that this crowd is so large speaks in how popular and how awesome this event is.”

It did make for some tight spaces and the humidity and hot weather gave it some tougher conditions. Army veteran Jason Long, 50, acknowledged he’d rather do it inside because it was difficult to wheel around the crowds to get back on and off the stage after his lifts.

“It was cool doing it in front of everybody. I liked the atmosphere,” said Long, who served from 1988-2006 and is an above-the-left-knee amputee and a PVA Southestern chapter member. “I liked the environment. There just wasn’t enough space.”

Puerto Rico PVA chapter member Oscar Velez enjoyed watching four of his fellow chapter members participate in the event. The 64-year-old Army veteran definitely liked the setting better than it had been indoors.

“I think it’s awesome. Everything. You see the people trying to motivate each other and do whatever they have to do to just being healthy,” says Velez, who sustained T7-T10 injuries in 2007 in a motorcycle accident in Puerto Rico. “I think it’s better outdoors. Everybody joins. Sometimes, you know, people just pass through and that’s it. But outdoors, I think it’s better. This is the first time I’ve seen it outdoors.” 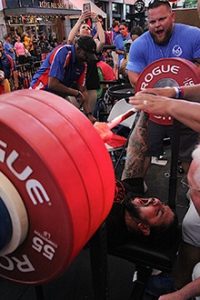