A first-time obstacle course participant and only second-time NVWG competitor, the 36-year-old U.S. Marine Corps veteran accomplished an astounding feat. In the new head-to-head format, Conner completed the obstacle course three times and defeated each of his three opponents to win the Jim Haynes/Joe Little Trophy.

Conner defeated 59-year-old U.S. Navy veteran Terry Rock in the finals, finishing in 2 minutes and 19 seconds compared to Rock’s 3:12. Conner admitted it was tough to try and see and remember what he had to do for every obstacle and what technique he had to use to get over it.  He didn’t know until Saturday morning they’d be changing the course and making it more difficult each time.

“Cause I was so excited, hot, winded, really my eyes wouldn’t focus on what was coming up and trying to hold my body up when I was going in reverse so I didn’t fall forward cause I got no trunk control, muscles fatigued big-time,” said Conner, a Hilliard, Fla., resident.

In the final day of the NVWG, co-sponsored by Paralyzed Veterans of America and the Department of Veterans Affairs, championships were abound. Besides the obstacle course, wheelchair rugby, wheelchair basketball and power soccer each had championships at the Orange County Convention Center Saturday afternoon.

This year, the obstacle course got more competitive and challenging.

The top two wheelchair athletes each of the four slalom divisions advanced to the Super G, with each being seeded based on their times. They squared off in head-to-head finals and a bracket-like setup, with the winners moving on to the semifinals and finals. That meant they had to complete the course, which changed with harder setups each round, three times.

Conner has two injuries – he sustained a traumatic brain injury and has post-traumatic stress disorder after a vehicle explosion in Iraq in 2007 and in 2010, he sustained a T9 spinal-cord injury after a motocross accident in Texas.

Conner first participated in the NVWG in 2011 in Pittsburgh, and finally returned this year. He said his physical therapists convinced him into trying out the obstacle course while he was working with the ReWalk exoskeleton this past November.

He acknowledged the key was remembering to breathe.

In wheelchair rugby, Team Mercury stayed calm despite a late fourth-quarter comeback effort from Team X to take home the title. Team Mercury led 38-30 after three quarters, but Team X cut the deficit to four with less than 5 minutes to go in the fourth. Team Mercury held off the rally, though, and pulled out the win.

“You know, there’s something about running up to somebody and just running into them and hoping that they fall over,” said Rodriguez, who served as an air traffic controller from 2009-16 and was injured in an auto accident in Fort Rucker, Ala.

“It was amazing. It was amazing. Everyone did their job,” said Fritz, who served in the Army from 1989-1994. “There was no ego and it was all about working together and that was awesome.”

Later that afternoon, the PVA Central Florida Chapter was awarded gold medals and honored with the Ernie Butler Cup for capturing the first NVWG Team Relay event on Tuesday. Central Florida’s four-member won the nine-team event, finishing in 16 minutes and 29 seconds and defeating the PVA Mid-Atlantic Chapter (18:40) and Keystone Chapter (18:42) for the honor.

Butler’s daughter, Tia Butler, and wife, Vicki, were in attendance this week and presented all the Central Florida Chapter with their medals

“I think this has been the most cathartic moment because it’s been the culmination of everything he worked towards. He loved the PVA and the Wheelchair Games. I mean it was second only to mom and me in his life,” said Tia Butler, an Austin, Texas, resident. “And to have an award named after him for a new event because that’s what dad believed in – innovation – and bringing new events. He brought boccia (ball) five years ago when it first started and now this. And so I just hope it motivates whoever wins it to see that you can create new events and make a really amazing footprint on the world just by showing people that you can do anything you want to do and that’s what he believed.”

Invacare Corporation National Account Manager Stuart Cohen announced the award and in his speech said that during the week Thompson “took the time to teach, encourage team members and other competitors and also served as a mentor to the Dublin Southeastern PVA novice athletes throughout this week.”

Just a night ago, the 47-year-old Thompson, who won a gold medal in 9-ball, had dislocated his right shoulder in the bronze medal softball game and he didn’t expect the award. He teared up as he rolled downstage to accept the honor.

“I didn’t have any idea that all this was in the making but to my fellow veterans I’d like to say, ‘thank you,’” said Thompson, who served in the military from 1989-2001 and sustained a T12/L1 injury after a motorcycle accident in August of 2006 in Sandersville, Ga. 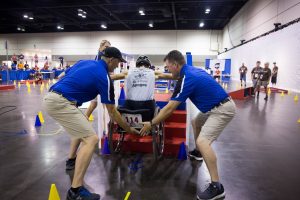