A mountain biker for nearly half a decade, paralyzed Army veteran David Hosick has longed to see the sport unified and welcomed across the adaptive community.

“For me and other hard-core athletes, mountain biking isn’t just a sport; it’s a part of us,” said Hosick, a six-year Army veteran who was paralyzed while playing college rugby in 1989. “It takes a special kind of animal to strap a 30-pound bike to your body and speed down a hill as fast as you can.”

Yet while the sport is part of Hosick’s identity, it is not one widely recognized or accessible to most adaptive athletes. Starting in 2017, however, new opportunities will open up for disabled veterans as Paralyzed Veterans of America Racing launches its first-ever instructional camps in off-road cycling and triathlon.

“It’s absolutely fantastic for Paralyzed Veterans of America to put their official stamp on mountain biking as a means to unify the sport so that more people can compete,” Hosick said. “I’d like to see this one day become a Paralympic sport.”

While no specific dates for the 2017 instructional camps have been set, the camps will supplement the Learn to Race and High Performance camps already developed by Paralyzed Veterans of America Racing. Kicking off the season is the Learn to Race camp on Oct. 5, 2016, in Springfield, Va., where new and emerging adaptive cyclists can learn the basics of road racing and handcycling, said Jody Shiflett, adaptive sports programming consultant for Paralyzed Veterans of America.

“We are branching out in order to offer additional adaptive sports opportunities to our members,” Shiflett said. “The purposes of the camps are to ensure veterans have the proper instruction as well as a chance to experience off-road racing and triathlon.”

Before disabled athletes can become part of the programs, however, they must prove a certain level of fitness, Shiflett added. “These sports are not for just anybody,” he said. “An athlete should know what their limitations and abilities are and what the environment is asking of them.”

For Charles McDonald, an Army National Guard veteran and Paralyzed Veterans of America Racing team member, cycling – and particularly mountain biking – was key to his rehabilitation following the above-elbow amputation of his right arm in 1998. “Cycling was a big part of the transition process,” he said, “in part for being fit to deal with rehabilitation and also for helping my depression.”

McDonald has since been pushing for recognition of off-road cycling as another opportunity in a growing list of activities available to the disabled community. Among the greatest barriers to the sport’s emergence, however, is the fact that an off-road handcycle typically costs more than $5,000, he said. As the sport gains recognition and acceptance in the adaptive community, the hope is that more funding for it will follow suit, he added.

“I think any camp is a step forward for adaptive mountain biking,” MacDonald said. “But we are going to need an enormous amount of support for this to take off.”

To stay up-to-date on the dates and locations for adaptive handcycling, off-road cycling and/or triathlon camps, check Paralyzed Veterans of America Racing’s website, or contact Jody Shiflett at 757-439-8031, or handcycling@pva.org. 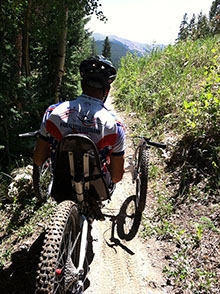