Team USA will have a Marine veteran shooting for gold

The paper, posted proudly on de la Rosa’s desk, was bold in this: he started competitive shooting only two years ago.

“Usually, when I compete, my motivator is competing with others over who will buy the coffee after,” he says. “Now, two years in, and I’m going to be a Paralympian. I still can’t believe it.”

While his natural skill for shooting was cultivated in months, the inciting incident to de la Rosa’s Paralympic dream started more than 20 years ago. Born and raised in Chicago, de la Rosa was stationed at Camp Pendleton in Camp Pendleton, Calif., in 1993 when he was attempting to stop a robbery outside of the base and was shot in the back. The bullet – which is still in his back – injured his spinal cord at the T4-T5 levels, leaving the now medically retired Marine Corporal a paraplegic.

“It was hard because I went from being a Marine to being in a wheelchair and having to rely on others for almost everything,” he says. “Depression, post-traumatic stress disorder (PTSD) and nightmares set in and took a while to get over.”

After moving from Oregon to San Antonio in 1998, de la Rosa learned about Paralyzed Veterans of America’s adaptive sports programs and was instantly enamored with hunting, fishing and other outdoor sports. But darkness returned, sending him back into depression for many years.

“I got really into sports but then I stopped because I wasn’t in the right place; I got depressed again and started drinking,” he says.

But in 2014, adaptive sports were the force that pulled him out of darkness a second time. He met a group of fellow Paralyzed Veterans of America members with similar injuries who were active in track and field, weightlifting and shooting sports. De la Rosa tried them all, but shooting stood out.

“The first time I went out to shoot, I did so well on it that people were stunned,” he says. “They told me to go to the National Veterans Wheelchair Games (NVWG) in Dallas, and I killed it. I earned the gold medal, and second place was 100 points behind me.”

De la Rosa followed up the NVWG win with a second place finish at the air rifle/air pistol tournament sponsored by Paralyzed Veterans of America and the Wounded Warrior Battalion at Camp Pendleton in Sept., finishing just one-tenth of a point behind the first-place winner in the Pistol SH1 division.

“It was only the second time I competed, but I knew what to do,” he says. “The eyes, the steadiness, everything is still there.”

By spring 2016, de la Rosa was on his way to competition on the world stage. He competed with Team USA in the air pistol competition in Poland, where he earned the silver medal, missing the gold by only one point. He went on to compete in Germany, but as the unfortunate news of his father’s passing came during the competition, he lacked the concentration necessary to medaling in the event.

By early August, he thought his Paralympic goals for 2016 had been dashed, but as two spots opened up, de la Rosa got the phone call that fulfilled the dream he still had posted to his desk – one he thought was for 2020.

“My coach called me two days ago, and asked if I wanted to go to Rio,” he says. “I said, ‘What, as a spectator?’ I couldn’t believe it was actually as a competitor. I thought maybe they made a mistake.”

Like many Paralympians before him, de la Rosa traces his journey to the Paralympics back to one event: the National Veterans Wheelchair Games (NVWG), co-presented annually by Paralyzed Veterans of America and the Department of Veterans Affairs.

“All of the veterans competing in the 2016 Paralympics show the possibilities that Paralyzed Veterans of America and the VA have opened up for us,” he says. “For me, the Wheelchair Games are how it all started.”

It’s the spirit of the NVWG that de la Rosa says will carry him through his first-ever Paralympic competition. He’ll use it as a platform not only to earn a medal for his country and family, but as a means to encourage his fellow Paralympians and people with disabilities at home and abroad.

“Being a former Marine, I’ve always been about teamwork; we look out for each other and have each other’s backs,” he says. “Even when I’m not competing, you can be sure I’ll be behind one of my teammates supporting them.”

Going forward, de la Rosa will continue to leverage his successes to give back. While he still has his sights set on the 2020 Paralympics in Tokyo, he also sees a future for himself coaching other disabled veterans to pursue adaptive sports.

“When I got hurt, I thought my life was over; I had no goals,” he says. “But when I started hanging out with other veterans, I started focusing and picked up goals. Now, I’d love to start coaching, to teach somebody how to shoot. And I want them to beat me because that means I’ve done my job.”

Above all, when it comes to living day-to-day with a life-changing injury, De la Rosa says there’s a Latin motto he lives by, translated in English as, “If you want peace, prepare for war.” For veterans with injuries, there will be rough days, but each morning you must make a decision to fight your battles and make peace, he says.

“It takes hanging around with positive people,” he says. “And prepare for war: get out there and believe in yourself – and you will win.”

Paralyzed Veterans of America congratulates de la Rosa and all veterans and people with disabilities competing at the 2016 Paralympic Games in Rio de Janeiro from Sept. 7-18.

Brittany Ballenstedt is a military spouse, freelance journalist and photographer in Washington, D.C. 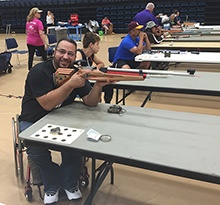