PVA From The Top – It’s My Turn

The journey to testimony before Congress

On June 11, 1986, the life I was building for myself changed forever. I was injured in a diving accident while serving at Marine Corps Air Station Cherry Point in North Carolina.

I was taken to a local hospital, and over the next four days, I was stabilized and prepared for transport to another hospital.
While awaiting the decision on where to go, I received good advice, probably the best advice I’ve ever received — to go to a Department of Veterans Affairs (VA) medical center where they specialize in spinal-cord injury (SCI).

On June 15, I was flown to Augusta, Ga., and admitted to Ward 1 of the SCI unit at the Charlie Norwood VA Medical Center. I spent the next 6½ months going through treatments to ensure I would be as healthy as possible.

This is where Paralyzed Veterans of America (PVA) came into my life. While lying in bed, a PVA Southeastern Chapter
member came in my room and asked what my plans were for the rest of my life. We talked over the next half hour about many things, and one of the things he kept telling me about was PVA. He told me the many great things this organization did and that I should become a member. That man who came through my door was David Vaughn — a well-known and respected PVA member.

I was young and naïve, but I can promise you that over the next few days I learned that my life had changed forever, and I would not be able to go back to the military. That’s when PVA national service officer Chuck Izzet came into my room, listened to me, told me what I needed and helped me start a stable direction forward.

So, I moved back to the St. Louis area and in 1992 was introduced to the PVA Gateway Chapter. I was asked to join the board and start serving my fellow veterans. David made an impact on my life, and those people with and around whom I’ve served have made an impact in my life, too.

When then-PVA Gateway Chapter President Gene Crayton asked me to serve on the board, I thought he was crazy. Over the next four years, I served on the board in many positions. But I learned the most when I was working with the advocacy and legislation committee.

The first year I went to Washington, D.C., for the annual advocacy and legislation seminar, I sat through the meetings with other chapter representatives. Then, I went to Capitol Hill to talk to Congress members. I also got to watch the PVA national president sit in front of Congress and give testimony.

To me, that was a strong and telling moment. To have a seat in front of Congress and tell them what needs to be fixed is one of the greatest things our organization can do to improve the lives of veterans and those with disabilities.

All those years ago I saw then-PVA National President Richard Johnson sitting up there at the desk talking to Congress, and I thought to myself that has to be one of the best feelings — to know your voice represents thousands of veterans and can be effective in improving the quality of life for millions of people.

I’ve been blessed to watch presidents such as Joe Fox Sr., Homer Townsend, Bill Lawson, Al Kovach Jr., and David Zurfluh speak in front of Congress. Next month, it’s my turn. I never thought I would be here, but I promise I take this seriously and will not let the VA health care system that we have fought for and deserve to be dismantled.

It’s my turn for my voice to represent our members and millions of veterans who earned the right to have the best health care our nation can provide. I’m asking you to do what you can to help me and our fellow members and veterans.

We need your efforts to ensure our veterans continue to receive the best quality of care possible.

Stay tuned for my March column, where I’ll tell you what PVA’s priorities are and how you can help. 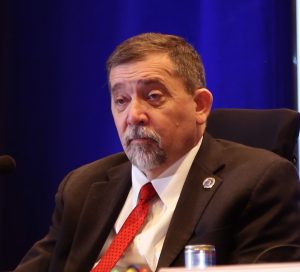