PVA From The Top – Succession Plan

PVA needs our young members, our new members, those members who don’t think they belong with us or could offer anything

As Paralyzed Veterans of America (PVA) and the Department of Veterans Affairs started off July’s National Veterans Wheelchair Games in Tempe, Ariz., I was reminded of my very first Games in Dayton, Ohio, in 1992.

Those Games were a stepping point for me. It took me from being an athlete and wheelchair user to actually being involved in PVA. You see, at the end of the Games that year, then-PVA Gateway Chapter President Gene Crayton came to me and said, “You look like a young man who’s got energy and can help the chapter.”

I have to admit I chuckled at first. What did I know about helping people inside PVA? I knew it was a great organization that had helped me get stabilized in my new reality. PVA helped me apply for benefits, gave me information about home modifications and also instructed me on ways I could go to school.

The only things I had done up to that point were fight for the Americans with Disabilities Act to be passed and start college. I had competed in track and field and tried skiing, but I really didn’t know what I could offer anyone inside PVA or any veteran needing PVA.

This is where my mentorship actually began. Gene brought me to the Gateway Chapter and introduced me to some really important members and future friends.

Then-Gateway Chapter Executive Director Al Kilpatrick talked with me for a little bit, gave me some advice and asked me if I was willing to step up and do more work. At that point in time, I knew I needed to help.

Through their gentle mentoring, I learned a great deal and built up more knowledge about PVA. I went to some national meetings, including the 1993 convention in Minneapolis and 1995 convention in Fort Worth, Texas.

Those two events alone were eye-opening and expanded my knowledge of PVA. I also went to advocacy and legislation seminars in Washington, D.C., so I could better advocate for our members.

I’ve met many great PVA members over the 36 years of my membership. I never aspired to be the president of PVA, but if Gene hadn’t taken the opportunity to encourage and mentor me, who knows where I or PVA would be today? That’s why I’m writing this column.

PVA needs our young members, our new members, those members who don’t think they belong with us or could offer anything. Sometimes we get stuck in our ways and fail to see how we can evolve and become better.

There’s always talk about the future of PVA, but if we don’t start mentoring our younger members and letting them tell us what they need, we’ll never grow and we won’t survive.

There are a few quotes from some famous folks that really strike home for me. Oprah Winfrey once said, “A mentor is someone who allows you to see hope inside yourself.” Is that what Gene and Al saw inside me — hope?

Another great quote is, “Leaders should influence others in such a way that it builds people up, encourages and edifies them, so they can duplicate this attitude in others,” from author and motivational speaker Bob Goshen.

The previous leaders were mentoring me and actually creating a succession plan. Succession planning is also known as replacement planning and often involves passing on leadership positions of a company to someone else.

Hopefully, as everyone gets a chance to read this, they’ll look out at others in their community, inside PVA and find the next leader — the next person who can do the job to better serve the membership. Find someone to mentor and hopefully build into PVA’s next leader. 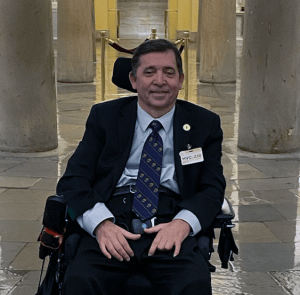