PN magazine editor takes a look back at Speedy

I have twin sons who are now 22, and one of them, Noah, has become a real tattoo aficionado. This love for tattoos has become, in the eyes of his father, a bit excessive.

This coming from a retired sailor who never got a tattoo, but I will admit there was a time when I did give it some serious consideration. A number of years ago when I was the president of the Paralyzed Veterans of America (PVA) Minnesota Chapter, one of our members got a tattoo I thought was so awesome, it almost made me take the plunge. The tattoo was of PVA’s iconic original logo, Speedy. 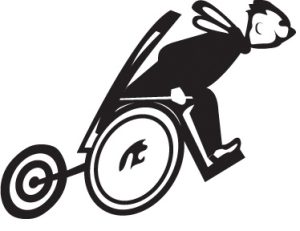 April is PVA Awareness Month, and I’d like to delve into this enduring symbol that I’ve always held as special.

Speedy was created in late 1946 at the Birmingham Army Hospital in Van Nuys, Calif., by Wilder A. Johnson Jr. The paraplegic patients at the hospital had just formed a new organization and thought they needed an appropriate emblem to symbolize their new entity.

Johnson, a patient at the hospital and cartoonist, was tasked with the job. He found his inspiration, and a little humor, in fellow paralyzed veteran Dick Sloviaczek.

Sloviaczek was said to be frequently seen zipping around the hospital hallways, pipe in his mouth and a trail of smoke following him. California had found a logo for its new organization and had no idea of the big future that lay ahead for the little man in the wheelchair called Speedy.

PVA was formed as a national organization soon after California and other groups around the country had laid the groundwork. The following is an excerpt from the 1959 PVA convention minutes:

“REGISTRATION OF ‘SPEEDY’: There has been much comment from many people in high office on our man-in-the-wheelchair emblem which we call ‘Speedy.’ Adopted as our national symbol in September 1949, ‘Speedy’ has injected humor into an otherwise serious business, and his personality has reacted favorably with the many people we correspond with. Realizing the importance of preserving and protecting this emblem of the paraplegic veteran, the convention directed the president to investigate the possibility of registering ‘Speedy’ as the trademark of the Paralyzed Veterans of America. We have been informed that there is no confusingly similar design registered at the United States Patent Office, so it is apparent that we will succeed in registering ‘Speedy’ permanently as our own.”

The official logo has since changed, but somehow Speedy has continued to roll around the organization in one fashion or another. The Speedy Award is one example; it was established in 1956 as PVA’s highest honor and remains so today.

The award is bestowed annually to both members and non-members in acknowledgement of outstanding accomplishments in the field of paralysis.

I developed an affection for Speedy shortly after becoming a PVA member, but I recently found the realization of that affection in Johnson’s own words: “There is a good deal of worthwhile philosophy to be observed in the little man if one will take the time to study him carefully. First, he is happy. He is not sitting around and crying the blues about being in a wheelchair. Second, he’s got places to go and he’s in a hurry. You better get out of this guy’s way or he’ll run right over you. Third, and most important, you don’t feel sorry for him. On the contrary — you can’t help admiring his spunk. He’s symbolic of happiness, energy, drive, admiration and guts, and those are respected qualities in the paraplegic way of life.”

A Speedy Award may not be in everyone’s future, but I just may rethink that tattoo idea.