When Air Force veteran Sylvia Longmire was diagnosed with MS, she had to rewrite her mission on life

U.S. Air Force veteran, Sylvia Longmire had a pretty cool job in the military. The daughter of Cuban immigrants, Longmire attended college on an ROTC Air Force scholarship, and ultimately served 8-years as a Special Agent in the Air Force Office of Special Investigations.

Unfortunately for Longmire, she was diagnosed with multiple sclerosis (MS) mid-career that ultimately ended her service in the Air Force.

But, like many veterans, she was resilient and resourceful and before too long was working as a senior intelligence analyst, focusing on Mexico’s drug war and border security.

“I later became an independent consultant and author on these issues, and within a few years, I became one of the country’s top experts,” says Longmire. “While it’s not my main focus anymore, I still write analyses for American Military University every month.”

Longmire has become one of the top authorities on accessible travel and shares her experiences in an effort to help others living with disabilities shed their fears and hesitations of travel.

“I took inspiration from other accessible travel writers and started my own award-winning accessible travel blog,” says Longmire. “Spin the Globe was born in November 2016, and since then it’s been my mission in life to encourage as many people with disabilities as possible to explore this amazing world.”

Today, Longmire oversees her travel blog and has become an award-winning accessible travel agent with her agency.

For Longmire’s full story, visit our friends at Cure Medical.

You can visit her YouTube channel for more information on accessible travel. 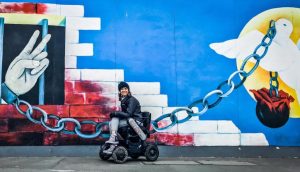