The Marine Corps lost its first Department of Defense Warrior Games competition to a team from the Army in 2014.

This year, the Army’s Training and Doctrine Command is hosting the event, and first-time Warrior Games competitor and Army veteran Sgt. Jason Smith, 36, will represent his branch in the bench press, shot put, discus and rowing. He is hoping to share his favorite lifting strategies with the other athletes, but also push his personal limits.

“I have always been into fitness,” Smith said. “Even in the hospital, doing push-ups in rehab with half my hand gone,” he said about the IED injury that left him without both legs and his knuckles on his right hand. “I did not want to stop. I went from my most alpha state to not even being able to sit up, but I wanted to live a life I wanted.”

In 2019, Smith finally earned his personal training certification but has been helping post-9/11 veterans get into shape for several years as a volunteer and trainer with the nonprofit Catch A Lift Fund.

The 2021 Warrior Games will take place Sept. 12-22 at the ESPN Wide World of Sports Complex at Walt Disney World Resort, in Orlando, Fla., which is serving as an inaugural venue.

The annual event, first held in 2010, will challenge 300 athletes representing the Army, Marines, Navy, Air Force and Special Operations Command, and will include wounded, ill and injured active-duty and veteran military service members from the U.S., Georgia and the Ukraine.

“I feel like I’ll do well,” Smith said. “I needed something positive when I signed up, so making the trials alone was amazing.”

Smith’s transition from service to his country and others to self-care is a product of time spent at home and encouragement of his family since the novel coronavirus (COVID-19) pandemic.

U.S. teams were announced on April 19, and Smith described the process as a lot like boot camp.
“Obviously, basic training was a lot harder, but it’s the same concept,” he said. “You’re not just given a position, but if you do your best, you’ll make it.”

To prepare, Smith is working out using a Concept2 Rowing Machine. “I’ve never rowed on the water, so that will be interesting,” he said.

Smith was born in California, where his father, Larry, was an active duty Army sergeant first class. The family settled in Georgia, where Smith attended Ringgold High School.

“I knew I was going to serve, too,” he said, also following in the Army footsteps of his mother, Gayle.

Smith joined as an infantryman in 2009 and was stationed in Fort Lewis, Wash. He deployed in 2012 to Afghanistan as a team leader but was injured just four months into his tour.

Smith completed rehab at Brooke Army Medical Center in San Antonio, where he played his lifelong passion of basketball from a wheelchair, until retiring in 2014.

“I was going to get a cabin in the woods. I wasn’t a danger to myself or anybody else. I just wanted to be left alone,” he said. Then, Smith met his now-wife, Lauren, whom he said brought him back to civilization.

“She was able to look past my injuries when I didn’t know how much love was going to come around for a guy in my situation,” Smith said.

The couple married and in May 2015 were approached by Chattanooga, Tenn., nonprofit Steps 2 Hope, which built them a smart home in Ringgold, Ga., to accommodate Smith’s adaptive needs.

“It was an awesome blessing,” he said, adding that 6-year-old daughter, Lila, and 4-year-old son, Barrett, were blessings, as well.

Smith considered joining the police force, but he was worried about having the prosthetic mobility for the job. The lesson from that time he now takes to athletics. “I don’t want to do something to stroke my ego. I want to be proficient at it,” he said.

Smith and his family are excited about the Warrior Games.

“Lauren pushed me to be proactive for myself, and I am glad I finally decided to take a stab at it,” he said.

Smith first continued his post-military career as a builder for what is now the New York-based Tunnel to Towers Foundation, which builds mortgage-free smart homes for catastrophically injured veterans and first responders, and Smith did the vetting process for the veterans it serves. His family then moved from the home built for them in 2015 to a similar home in Signal Mountain, Tenn., after yard work became difficult for Smith to do from his chair.

The Army may have been the last service branch to adopt an official song, “The Army Goes Rolling Along,” in 1956, but for Smith, life after the Army, despite its challenges, is about carrying the tune.

“With nonprofit work, I’m with a team trying to sell an idea,” he said. “Seeing a veteran put in a better situation is the reward. In athletics, I am selling myself, and I hope I meet those standards or break through them.”

Ultimate participation in the Warrior Games represents the culmination of a service member’s involvement in an adaptive sports program.

Smith’s current fighting weight is 180 and bench max is 410 pounds. His goal is to lift 450 pounds before September, and he humbly hopes for a gold medal and a couple of Warrior Games records.

If that doesn’t happen?

“I’m happy with who I am now,” he said. “If I didn’t get hurt I wouldn’t be the man I am. In the Army, I was 6 foot, 220 [pounds] and muscled up. My injury gave me time to think about what mattered, and that is being at my best and helping people.”

With this new mindset, Smith wishes the Warrior Games was sooner.

“I don’t want to brag about myself or take away from other veterans,” he said. “I just want to be a part of it.”

For a complete schedule and sponsor, volunteer and spectator information, including the Games’ Family Welcome Day activities being led by Fisher House Foundation, visit http://warriorgamesfamilyprogram.org/. 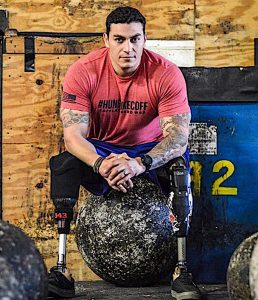