Team Titles Start Being Handed Out

Dennis Brostek thought lifting himself up a 30-foot rock-climbing wall would be considerably harder.

The Marine Corps veteran has done it at the Veterans Winter Sports Clinic in Aspen, Colo., multiple times. But ascending that height with a pulley system during the 39th National Veterans Wheelchair Games (NVWG) team challenge Monday afternoon at Belvedere Park in Louisville, Ky., wasn’t as physically taxing as he anticipated. That was one positive. The other – that he finished.

“I thought it was easy. In Aspen, they can adjust how much weight of your body you were lifting from a quarter to a half to a full and I usually do full body weight in Aspen and this was a lot lighter. It was maybe half,” said Brostek, a Paralyzed Veterans of America (PVA) Buckeye Chapter member who served as a radio operator from 1964-68 and sustained a C5-C6 injury in a 1997 car accident in New Mexico. “Oh yeah, it was fun cause I did it and I finished it and I had a good team. Finding my time (was good), plus I had a good time.”

During its fourth day, the NVWG, co-sponsored by PVA and the Department of Veterans Affairs (VA), featured lots of events, including adaptive golf, 9-ball, archery, an obstacle course known as slalom, power soccer, quad rugby, power soccer and wheelchair softball to go along with the NVWG team challenge.

In powerlifting, competitors had 2 minutes to lift half their body weight with as many reps as possible. “Grenade” toss featured athletes having to toss either a shot put (paraplegics) or club throw (quadriplegics) in or as close to a graveyard bunker as they could. Laser air rifle tested athletes’ abilities to shoot and hit a target. In the sled pull, competitors pulled a sled 80 feet down the street in either their power chair or a regular chair. And in rock climbing, they used a pulley system to scale a 30-foot rock-climbing wall.

Teams were comprised of groups of five. Competitors performed the team challenge all inside the park near the Ohio River, in humid, cloudy and warm conditions with fans, other athletes and spectators viewing them from all around. The PVA Mid-Atlantic Chapter captured the team title.

Originally, the event was supposed to be a relay, but organizers changed that because it would’ve taken too much time. So, PVA sports director and co-Games organizer Jen Purser said they regrouped. It had some hiccups to start, with some events starting earlier than others, but she acknowledged that was OK.

“They went ahead and just froze their time or took the amount of weightlifting or throws by individuals to come into a tally for a team score. It all worked out and everybody seemed happy with it,” Purser said afterwards. “It did (go pretty fast), which we knew that was going to happen, so that’s why we opened up through a little bit earlier. Yeah, because it’s hot and we knew that it, and it’s the middle of the day, and we know everybody’s hungry. You know, we want them to come out and have a little competition in between everything – something a little different.”

First-year NVWG participant Darren Dunson Sr. didn’t mind. The Marine Corps veteran and Denver resident was one of the last competitors to finish the weightlifting part. He lifted half his body weight (130 pounds) 57 times during that 2-minute span. Considering he’d just competed in powerlfiting outdoors at 4th Street Live! in Louisville on Sunday evening – winning a gold medal in his weight class with a 300-pound lift on his third and final lift – the PVA Mountain States Chapter member thought his rep count was pretty good.

“I was energized for it,” said Dunson, who developed MS and has been in a wheelchair since 2012. “I think that was great. It was an awesome event. It was a lot of fun. A lot of veterans doing a lot of amazing things despite their handicap or whatever disability they may have.”

A power wheelchair user, the 70-year-old Deltona, Fla., resident did the sled pull – and went high up in the air and started off with a wheelie before to get the 80-pound sled moving behind him.

“I thought it might happen. I tried to get them to hook it up to the front so it wouldn’t do it, but they said I had to go from the back. So I had a suspicion it was coming. It did (make it more fun) a little bit,” said Kirk, who served from 1967-70 in satellite communications and sustained a C5-C6 injury Feb. 7, 1980, in a snow-skiing accident in Steamboat Springs, Colo. “(With a) power chair it’s hard to tell but it was a little slow taking off until the motors adjusted.”

Jerry Baylor had to adjust – but in the “grenade” throw – as well. The Marine Corps veteran and Leechburg, Pa., resident had never done a club throw before and he didn’t know about the bunkers until they learned the rules before the event started. Baylor threw the club in the bunker twice and near the bunker once to score points.

“The secret is you put it in the bunker you get double-point values. If you don’t put in the bunker, they measure it and you get the meters distance,” said Baylor, who served from 1966-70 as a combat engineer and sustained a C6-C7 injury in an August 1980 motorcycle accident in Pennsylvania. 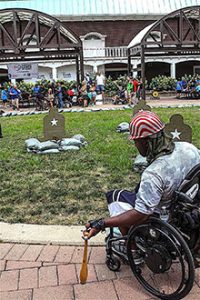