The ways people connect and communicate are ever-changing and ever-increasing. Telecommunications products like Skype and FaceTime have made it possible to see and hear someone without physically being in the same room.

Conroy, who works at the Department of Veterans Affairs (VA) Maryland Health Care System, said the MS Centers for Excellence found a substantial number of veterans live in rural areas with more than two hours’ travel time, they are high consumers of care to manage their MS symptoms and the newer disease-modifying therapies require more follow-up, so transportation costs and the complex needs of the patients are high. 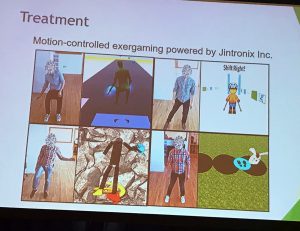 However, Conroy said the VA has been very proactive with instituting many telerehab devices, as well as the VA Video Connect application, which connects veterans with their health care team from anywhere, using encryption to secure a secure and private connection.

“For telerehab, you can have consultations, you can have monitoring, you can have direct therapy, and you can do it in the patient’s preferred setting or in a clinic-type setting or work setting,” Conroy said. “There are different modes of care, but what seems to be embraced now is real-time, clinical face-to-face delivery of care.”

“It really implements the anywhere-to-anywhere VA health care, so it allows providers to reach out their specialties to all areas, and it allows patients to practice in a home-exercise environment with supervision,” Benson said. “I’m a physical therapist, and [when I give] prescriptions, they do fantastic in the clinic when you’re providing that feedback. They go home, and you’re like, ‘How did you come up with that?’ They have all sorts of adoptions. So it’s really nice to be able to have that in their own home environment, you can see what they’re doing … and you can then easily access their homes that way.”

While there are benefits to telerehab, such as allowing providers and patients to be more flexible and productive, there are also barriers and challenges, Benson said.

Not having access to the internet or a high-speed internet connection can be barriers, can state reimbursement rates, policies, regulations and licensure costs, especially for non-VA providers.

Despite the challenges, Conroy said telerehab provides a great opportunity for research studies and programs like the one her team developed through a collaboration of the Baltimore and Washington, D.C., VA medical centers.

To be admitted to the 12-week program, MS patients were evaluated and given a typical in-person physical therapy assessment of range of motion, strength, functional mobility and gait and balance. Participants were issued a dedicated, encrypted tablet computer and Microsoft Xbox Kinect sensor and were given training on how to access the exergaming activities. Video follow-up visits were conducted an average of 2.38 times per week via the tablet.

Based on patients’ goals for movements, therapists could use the tool to select appropriate vignettes they wanted their patients to complete at least three times a week. For each vignette, therapists could get a read-out of either the quality of the movement or the number of repetitions. 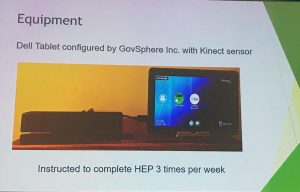 By the end of the program, the average 25-foot walk time had decreased from 10.83 seconds to 8.74 seconds, and gait speed improved from 19.3 to 8.74 seconds. Overall, the participants reported decreased physical limitations in walking and fatigue. In addition, there were substantial savings in distance traveled, commute time and costs.

For this specific exergaming platform, Chanpimol said they found it to be most beneficial for balance training, endurance and lower extremity strengthening. While barriers for patients to receive physical therapy significantly improved, Chanpimol noted that it was critical for therapists to see their patients via video at least once a week.

“First, this allowed for building the therapeutic rapport, two, it allowed me to get a qualitative assessment of how these exercises were going,” said Chanpimol, who also works at the Washington DC VA Medical Center. “Because sometimes there were exercises I might prescribe that patients would say, ‘Well, this is just boring,’ and they don’t want to do it, or they’d skip it. Also, they had potentially technology issues where for whatever game I might have prescribed, [One patient said] ‘This one wasn’t particularly reading my body movement.’ So then, even through video, I can assess, ‘What is it that you’re doing? So show me how you’re moving, and I can give you a critique or we can just take that one out.’”

Chanpimol said downsides to the technology were that it was relatively difficult for patients to get a moderate-intensity cardio workout, and it didn’t allow enough variation in workout intensity for those with less impairment.

Conroy added that because the vignettes are games that give patients a score, some might feel less motivated if they consistently get low scores that reinforce what they’re not strong at doing.

In the future, Chanpimol said they’d like to move toward remotely conducting entire physical therapy sessions, possibly involving a technician or caregiver for safety.

“The hopeful dream … is essentially having a virtual clinic,” Chanpimol said. “So essentially, a cloud-based clinic where referrals can come into specialty providers that could see anywhere to anywhere. You know, really leveraging those types of policies that have been around for years. But we really don’t have the capabilities and the technology, within the VA at least currently, to be able to do that.” 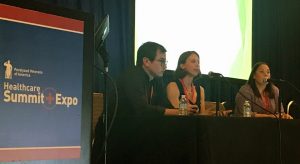