Testing Out A New Device

When people experience a spinal-cord injury (SCI), their first thought is generally about the paralysis of the arms and legs. But paralysis of the person’s trunk, or core strength, can be another issue – especially for those with a level T8 injury or higher.

While the degree of impairment differs from person to person, the ability to maintain posture while sitting still decreases significantly at injury level C6.

But a team of researchers backed by funding from the Minnesota Office of Higher Education Spinal Cord Injury and Traumatic Brain Injury Research Grant Program — a unique funding opportunity in Minnesota that encourages device development — is developing a trunk control system that would allow people with SCI to perform tasks, including cooking and performing pressure relief, without worrying about falling forward or out of their wheelchair.

“Trunk control is a significant limiting factor that has received relatively little attention in the literature,” said Goldish, who works at the Minneapolis VA (Department of Veterans Affairs) Health Care System.

One unique thing about the project, Goldish said, is that the grant program allowed his team to enter into a research project without having an actual prototype or idea for a prototype. Instead, they started with a problem and had to research a solution.

Some current solutions to counteract trunk instability include adjusting the tilt of the wheelchair backrest or seat or use of a chest strap. However, each method tends to make people feel restrained in their movements, Goldish said. They also decrease reachable workspace, meaning how far a person can safely reach forward to grab or drop an object. Some people instead opt to brace themselves on their wheelchair or knee, leaving only one hand free to perform tasks.

“What this does is it’s an all or none thing. So, when you’re leaning forward and you want to get back up, you can trigger with FES an electrical response, which gets you back to and upright position,” Goldish said. “But they haven’t tested it to see if it actually increases your workspace … so it can help you stay upright, or it might be able to help you get back from a fully flexed position. But to our knowledge, no mechanical device has been developed to assist in trunk control to improve bimanual workspace and pressure relief.”

So, the team has developed and begun testing a first-generation prototype with input from an eight-person focus group consisting of seven power wheelchair users and one manual wheelchair user with various injury levels. Participants were asked about their everyday activities, workarounds to compensate for their lack of trunk control during those activities, as well as any activities, such as cooking and traversing rough terrain, which they couldn’t do because of their trunk instability. They were also asked what an ideal technology would do for them and if it would be high-tech or low-tech; what the device would look like; what their perfect range of motion would be; and what would be the “deal-breakers,” for a potential device.

A nurse scientist with the Minneapolis VA Health Care System, Olney said they found the focus group had five main concerns: They didn’t want to have to add a second battery to power the device; they wanted a lightweight, washable vest with a front buckle and padded shoulders that could connect to the back of the wheelchair; they preferred the  mechanism to utilize sip-and-puff technology, a dedicated joystick or head paddles; they wanted it to be low-maintenance; and veterans involved in the study wanted to be able to obtain it through their VA Prosthetics Department.

The next phase was a brainstorming session with a team of engineers, who were given the data from the focus group and were asked to take 15 minutes to draw their device concept and then explain it to the team. They picked the four top concepts and then began refining the device with more input from the focus group.

The resulting prototype included a small hoist motor driven by the user’s wheelchair battery that’s connected by a single cord to a harness. Users trigger the device by pushing their joystick forward. They then use gravity to bring them forward to the position of their choice and brace their body with their elbows to bring them back to an upright position, Goldish said.

Two power wheelchair users volunteered to test the prototype and give the team feedback. While some comments were positive and others indicated there was room for improvement, Olney said one tester’s functional reach improved 311% while using the trunk control system. In addition, pressure mapping showed significant offloading when the second tester used the trunk control, compared to his regular pressure relief procedure.

“Our focus group identified significant interest in a device for adding trunk control to a power wheelchair,” Goldish said. “We think manual wheelchair users might come along at some point if we come up with a fairly mechanical version of this. User goals focus on bimanual reaching workspace and pressure relief. Pilot data suggests these goals can be achieved with a simple mechanical device without adding significant weight or complexity to a power wheelchair base and control.”

The researchers are now seeking funding to create a marketable product and conduct further testing. Goldish said they plan to make a quieter and smaller motor, build in an automatic braking system, create a way for therapists to set safety limits, add sip-and-puff controls and improve the aesthetics of the harness.

“If we allow patients to function in the world while they’re doing pressure relief, we don’t have to make it a chore,” Goldish said. “So, what I mean by that is if you tilt back in a wheelchair or you lean forward in a wheelchair or you lean from side-to-side when you do a wheelchair pushup, you can’t participate in usual activities … here, for a quadriplegic, you would be able to reach forward, do an activity and at the same time get pressure relief. That’s huge, in my opinion. That, I think, is the future.” 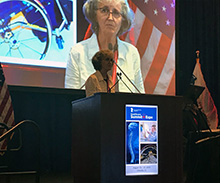