The Paralyzed Veterans of America’s (PVA) 3rd Annual Code of Honor Quad Rugby Invitational came to a close on Sunday, February 9, with new-comer team, the Brooks Bandits, taking the championship win over the Philadelphia Eagles 51-38.

Twelve Division II and III quad rugby teams from across the East coast gathered outside of Washington, D.C., at The St. James, an all-inclusive indoor sports, wellness and entertainment facility located in Springfield, Va.

The three-day event kicked off with a quad rugby clinic that was led by Marine Corps veteran, Tim Vixay, who put the athletes through a series of calisthenics, classes and drills designed to help improve their skills and gain a better understanding of the game.

“The only thing that separates a winning team and a losing team is who can create the most turnovers while minimizing their own,” says Vixay.

The Brooks Bandits certainly did their part in forcing a number of turnovers during the championship game against Philadelphia. High-pointer, Steve Walker, was fierce on the court, and with his quick and agile speed, made short work of the Eagles.

The biggest draw for the teams is, of course, the competition, but for some of the athletes, the Code of Honor event is a rare opportunity to get some hands-on experience at the team level, while enjoying the camaraderie they once shared during military service.

“One unique thing PVA likes to do is put athletes that potentially don’t get a lot of playing time on their home teams or novice athletes that aren’t as connected within the sport, and create an “At large” team,” says PVA’s adaptive sports program manager, Keith Cooper.

“We combine these athletes to give them an opportunity to be the starters, or get more playing time, or be introduced to the sport at the team level versus just going to a local gym to play.

It’s a great way to make sure that veterans who don’t have the resources get the chance to get the peer support and be part of the team.”

With the help of a few elite athletes, Vixay provides one-on-one instruction before sending the athletes to the court to put what they learned into action.

And since the Code of Honor is a United States Quad Rugby Association (USQRA) sanctioned event, the teams will be ranked and classified for the upcoming USQRA National Championships being held March 27-29. 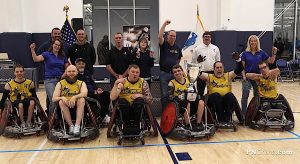