By John Groth and Brittany Martin

Joe Wittekamp scored 20 points, while Bud Norris had 14 and LeToi Adams had 12, as the Sun Devils defeated the Rattlers, 64-53, in Tuesday night’s wheelchair basketball championship game at the Maroon Gym of the Sun Devil Fitness Complex at Arizona State University in Tempe, Ariz.

After participating in his second straight NVWG, Ryan Garza’s eyes lit up when talking about it and helping the Sun Devils win the gold medal. A Marine Corps veteran, Garza was injured Oct. 3, 2011, in Helmand Province in Afghanistan, after a vehicle he was riding in ran over an improvised explosive device. It left him a below-the-left-knee amputee, and he’s had multiple traumatic brain injuries.

The 35-year-old Colorado Springs, Colo., resident, though, has found his purpose with the Games.

In wheelchair rugby, Team Turquoise took home the NVWG gold medal Tuesday night after winning two out of three games against its only other opponent, Team Fire Agate.

“It [doesn’t] always happen, but it’s nice because, more so than getting the medal, I play with the Oscar Mike Militia [all-veteran wheelchair rugby team], so we get to come here and reunite with all the friends and the companionship,” says the 50-year-old, who sustained a level C6-7 incomplete spinal-cord injury in a 2001 traffic accident. “It’s all about seeing family, rekindling relationships and just feeling like you can accomplish something. Your efforts are a lot more recognized here.”

In addition, the team had the chance to let three amateurs have more time on the court during the third game, which was played as an exhibition in the 2-Bay gym at Sun Devil Fitness Complex in Tempe, Ariz.

“We had the amateurs that started to learn a lot from it, and they started to listen to our directions, which was really nice to see,” says Mann, who lives in Germantown, Ohio. “Nice to see young players come up and learn from what we can teach them and show them on the court.”

And in the final NVWG event, team Green Machine defeated The Sidewinders, 3-2, in the power soccer title match in 2-Bay gym at the Sun Devil Fitness Complex at Arizona State University in Tempe, Ariz.

He sustained C3-C4, T10-11, L5 incomplete injuries in a 2001 motorcycle accident in Ashtabula, Ohio. This marked his third NVWG in a row, after he attended Louisville, Ky., in 2019 and New York City in 2021. He was thrilled to close everything out with a gold medal.

“Just the whole experience. Great bunch of guys, bunch of camaraderie. It’s the camaraderie I would say,” Turchan says. 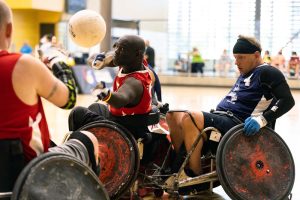