Harold Leon Bostick, 50, is a modern-day African-American Renaissance man. Bostick is also a paralyzed Marine Corps veteran, a thrill-seeker and has an obsession to try anything once. This originates from early in his life, through his education.

The education Bostick has allows him to do what he wants, where he wants, so he gets the most quality options out of life.

“I’ve learned that having options is what life is all about, whenever you come to an obstacle or a door, having lots of options and choices makes life grander,” Bostick says.

According to Bostick, who grew up near the projects of Chester, Pa., for an African-American growing up in the 1970s and 1980s there were two ways to get into college: either be athletic or be highly educated. Bostick chose the second option.

“I had a strong need and thirst for knowledge and always learned new stuff,” Bostick says. “I didn’t realize until later in life that I was a nerd. I was part of the math team, the academic bowl team, the science club, National Honor Society, Spanish honor society. I found athletics was the quickest way of getting out of a low-income environment, but academics was a very similar avenue.”

Bostick graduated from high school when he was 17, and he entered the Ivy League’s University of Pennsylvania (Penn), where he studied chemical engineering, receiving his bachelor’s degree in 1991. He followed it up with a master’s degree in statistics and business from Rice University in Houston in 1996. He added a law degree from Pepperdine University in California in 2003.

As an African-American, Bostick knows the power of a good education in society, which is why he admits he never stops learning.

“Education was unavailable in the past [to my predecessors] so my duty was to get the best education possible,” Bostick says. “I wanted to break racial perceptions.”

One route Bostick took while at Penn was a role in the military. Bostick originally signed up in the Naval ROTC program, hoping that he would be a Navy SEAL. Every male within four generations of his family has served in the Navy, dating back to his descendant, civil rights icon Robert Smalls.

However, Bostick failed the swimming portion of the exam, invalidating him from being a SEAL. Bostick was disappointed, but he was determined to stay within the military. He then changed to Marine Corps and moved to Quantico, Va., where he says he had a hard time fitting in.

“It was a big social change,” Bostick says. “I’ve never lived nor interacted with people who didn’t live in an urban environment.”

It took the words of the late Lt. Gen. Frank Petersen Jr., a mentor to Bostick, to get him through his days in the Marine Corps.

Those words stuck with him and inspired him while serving as a communications officer, eventually earning the rank of lieutenant.

Bostick never saw combat because of a 2001 accident, when a squat machine he was using at a California gym crushed his spine, causing quadriplegia. His injury was made worse by older service-related injuries resulting from over-training on his knees, blowing out all the tendons. The event resulted in a multi-million-dollar settlement with the gym and the exercise machine company in 2008.

Bostick shared the settlement money with the community, and a large portion of the payout went to a charity he started with friends called the Disabled Sports and Fitness Foundation (now part of the Triumph Foundation). Its purpose was to help people with disabilities afford and gain access to sports equipment for physical and emotional therapy.

Besides his charitable work, Bostick used his wealth of knowledge to get jobs in the private sector and worked at some prestigious Fortune 500 companies– General Electric and Shell Oil Company. Bostick also had a job with the National Aeronautics and Space Administration (NASA), but working for Shell was his favorite.

“I would go work with researchers and chemists and help them make cleaner, stronger bi-carbonate plastics,” Bostick says. “The idea was to find out market feasibility and what the plastics would be worth on the open market.”

Bostick also started physical therapy that helped restore his ability to move his arms, allowing him to play wheelchair rugby, wheelchair basketball, boccia and do handcycling races. In 2012, Team USA recruited Bostick for its Paralympic para cycling team, but because of a classification irregularity, he was unable to qualify.

These sports are just a small slice of a larger pie for Bostick.

“One thing about being in a wheelchair is needing a reason to get out of bed,” Bostick says. “You need to find a purpose. My purpose was to stay healthy and keep my body weight down and encourage me to live a healthy lifestyle and lift weights.”

One of the newest activities Bostick has found is a new type of adaptive target shooting, which involves putting an AR-15 rifle in one hand and shooting as he moves around various obstacles. He has perfected the skill and is ready to try shooting accurately from 1,000 yards away.

Even though he admits he isn’t the best swimmer, one sport keeping him occupied is scuba diving.

“The falling in part is easy, but it’s seeing a new world, which I never thought I would ever see,“ Bostick says.

Bostick is now retired and currently lives in La Quinta, Calif., with his wife, Tameca Anderson. He calls himself “a four-star husband married to a five-star wife.”

On a tame day, Bostick will sit at home, ready to cook Mexican food, while looking for the next house to flip with his wife or the next thrill to cross off his bucket list on his quest to know and do more. 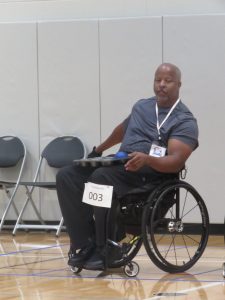