Shaking hands. Using a fork. Composing a message on a touch-screen phone. These everyday tasks become difficult to perform for an individual with a cervical spinal-cord injury (SCI). Many get by through the use of clever workarounds, tools and aids and the assistance of caretakers. Recently, another option has emerged to help these individuals regain fine motor skills in their wrists and fingers —  nerve transfer surgery. For Craig Trimmell, nerve transfer surgeries not only enabled him to better use his wrists and open, close and straighten his fingers, they also skyrocketed his independence. These surgeries empowered him to complete more daily tasks, as well as enjoy hobbies and activities with loved ones.

“I now have freedom to do a lot of things with my son,” says Trimmell. “I can work out again. I can push a manual wheelchair. Before, I couldn’t keep my hands open to push. That’s been a big one, too.”

Trimmell was one of the early patients with SCI to undergo the unique procedure in 2015. Ultimately, he had two of these surgeries, once for each arm. Trimmell served in the U.S. Marine Corps from 2004 to 2008, performing two combat tours in Iraq and earned the rank of sergeant. After sustaining a C4 SCI, Trimmell became involved with the Paralyzed Veterans of America (PVA) Gateway Chapter in St. Louis. While researching his injury and options, Trimmell came across some case studies about nerve transfer surgeries. His occupational therapist put him in touch with Ida K. Fox, MD, a pioneer in the use of nerve transfers for patients with SCI.

Fox is co-director of the Center for Nerve Injury and Paralysis at the Washington University School of Medicine in St. Louis. She was beginning to establish a relationship with the local Department of Veterans Affairs (VA) office when Trimmell first met with her, and she is now also an attending surgeon for the VA St. Louis Healthcare System.  After expressing his interest in the surgery, Trimmell underwent several tests to identify whether he was a good candidate. While his SCI included a fracture at the C4 level, his motor level is around C6 to C7. The tests determine if there’s a nerve that the brain can talk to and control that can be sacrificed and swapped in to talk to a muscle below the level of the SCI, without downgrading current function. Trimmell’s results qualified him for the surgery, and he began preparing with physical and occupational therapy sessions. The actual surgery lasted less than a day, and Trimmell described his pain as easily manageable.

“The bottom line is I need an expendable donor,” says Fox. “So if you think about arm function, there’s some redundancy or extras built in. For example, to bend the elbow there are three different muscles that do that. There’s your biceps, or your Popeye muscle, that everyone knows about. Underneath that is a muscle called brachialis, and then there’s a third muscle called brachioradialis that kind of helps with elbow flexion. Someone that has all three muscles working, I can probably take one or two of those if their brain can talk to those. I can swap the nerve over and swap it down to a nerve that goes to a muscle that the brain can’t talk to. So I’m kind of rewiring and working around the injury.”

Immediately following the surgery, Trimmell couldn’t use his arm or hand for a few days. He started with small exercises and manipulations during occupational therapy sessions, working on such tasks as opening, closing, pinching, grabbing and pulling a little at a time. At home, he continued doing exercises and incorporated visualization techniques. This was essential to his recovery in order to retrain his hands and fingers to function a different way. Some patients can struggle after surgery to use, and therefore build, their new functionality after spending years utilizing workarounds.

“Instead of turning my wrist over and using wrist tenodesis, I’d start visualizing my hand opening by itself just by opening it,” says Trimmell. “It was a very slow recovery process. I didn’t even notice over time myself, until I’d do little tasks and not even have to think about it.” 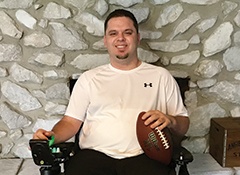 It took several months for Trimmell to begin seeing some results. The first significant improvement he achieved was the ability to pick up items. Eventually, he could open and close his hand freely. He accomplished all sorts of daily activities around the house by himself, took care of more personal hygiene tasks and it became easier to eat independently. It usually takes a year for the surgery to produce significant results, and these results can continue to improve for years after that.

“I would recommend it to anyone that has a SCI because of the freedom I’ve gained to do so much more by myself,” Trimmell says. “I accomplish more daily tasks. Independence is the best way to describe it. Getting your hands functioning again just opens the door to doing everything on your own again.”

Still Figuring It Out

“I took the ball from her and tried to get it up and running,” Fox says. “It’s neat to think about how surgical practice changes, and this is a very exciting thing. Rarely in surgery and medicine are we doing something totally new or adapting something from one population to a new population. We are really at the beginning. We’re still figuring it out. It takes a long time to see results.”

Previously, the main option an individual with SCI had for improving functionality in the wrist and fingers was to get a tendon transfer surgery. This surgery requires the patient to have a muscle with a tendon that’s a certain length, in a certain location, has a certain amount of pull and a structure that can be weaved into another tendon. Tendon transfers require more downtime and immobility than nerve transfer surgeries and provide a different set of results. Tendon transfers greatly increase strength but don’t provide the fine motor function needed to operate fingers independently. The fingers will move all together and work well for gripping and pinching. With nerve transfer surgeries, patients won’t have as much strength but will be able to bend and straighten their fingers independently.

“Nerve transfers just offer another option,” Fox says. “Obviously, we’d love to cure spinal-cord injury, but this offers a workaround to give function back in the meantime, even if it’s incremental, even if it’s minor.”

Fox advises patients that results aren’t guaranteed and it won’t be a monumental difference or restore their previous level of strength. However, many patients have experienced small improvements that have greatly helped their day-to-day lives by saving them time and adding independence.

Individuals with SCI can start being evaluated for the procedure after the initial recovery period has passed and a more accurate picture of their level of functionality has been established.

“If you have a certain pattern of injury, your options might decrease with time,” says Fox. “It might be ideal to get you in within six to eight months of your spinal-cord injury, once everything has stabilized, and figure out what pattern you fit.”

Fox is also working on other research projects to improve and expand this option for more individuals. She’s completing a comprehensive study on nerve transfers to restore upper extremity function in SCI through a grant from the Craig H. Neilsen Foundation.  Through funding from the Department of Defense, she’s also working to better define patient qualifications and developing a decision support intervention (DSI). The DSI would educate individuals with SCI, along with their clinicians and caretakers, on available surgical treatment options and their outcomes.

“Not everybody has the opportunities and information, so I think trying to get this information out there would be helpful,” Fox says. 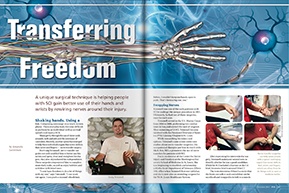