On October 13th, the United States Navy celebrates an impressive 244 years of history

From the sea to the air and the many missions in between, the men and women of the U.S. Navy work hard keeping the country safe. In celebration of 224 years of service, enjoy a few bits of Navy trivia.

The Continental Navy was formed on October 13th, 1775 – roughly six months after the start of the Revolutionary War – and was disbanded after the war in 1785. Our country went without a navy for nine years, however, this lack of defense made us an easy target for pirates. Under the Naval Act of 1794, our country’s navy was resurrected, and the U.S. Navy was reborn.

The Largest in the World

With 336,978 active duty sailors and more than 200,000 civilian personnel, the U.S. Navy is the world’s largest in terms of manpower. As one might imagine, the U.S. Navy maintains an impressive fleet, with 290 deployable ships, ten aircraft carriers, nine amphibious assault ships, 22 cruisers, 62 destroyers, 17 frigates, 72 submarines and 2,623 aircraft.

U.S. Presidents and the Navy

The U.S. Navy operates in nearly every major body of water around the globe: the Pacific, Atlantic and Indian Oceans, as well as the Mediterranean Sea, the Persian Gulf and the Horn of Africa. Additionally, the U.S. Navy also deploys ships to Europe, Japan and the Persian Gulf.

NCIS … not just a TV show

The Naval Criminal Investigative Service (NCIS) is the primary law enforcement agency of the United States Department of the Navy. This team of naval investigators comprised of 1,200 Special Agents, 900 civilian professionals and over 200 military members operate from 140 locations around the world to prevent terrorism, protect secrets, and reduce crime.

Navy SEALS are members of a Naval Special Warfare unit that are rigorously trained for unconventional warfare in any setting: on land, in the air, or at sea. As such, “SEAL” stands for “Sea, Air and Land”. Despite accounting for less than 1% of all U.S. Navy personnel, Navy SEALS are so highly-trained that their efforts make a huge strategic impact – so much so, that most of their training and operations are highly secretive.

With Compassion For Others, We Build

The Seabees are members of the United States Naval Construction Forces (NCF). Founded in 1942, the Seabees play an incredibly important role for the U.S. military, building military bases and paving much-needed roadway and airstrips in combat zones. During WWII, the Navy recruited skilled civilians working in construction trades to help with construction efforts. Because of this focus on skill and experience, the average age of Seabees during World War II was 37 – much older than the average member of the military.

While the Black Knights are on a three-game winning streak, the Navy Midshipmen leads the all-time series 60-52-7. The rivalry between the United States Military Academy at West Point, New York and the United States Naval Academy at Annapolis, Maryland is one of the biggest – and oldest – football rivalries. The teams have been going head to head since 1890 and will meet again on December 14, 2019 at Lincoln Financial Field in Pennsylvania.

PN Online would like to take this opportunity to wish the men and women of the United States Navy a very happy 244th birthday and thank them for their continued service. 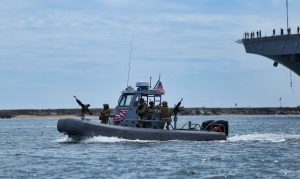