On Christmas night, 2008, Natasha Price went to bed at her aunt’s house in Hereford, England, after enjoying a festive holiday.

Price, 28, had lived most of her lifetime with a variety of health issues. Little did she know that her life was about to take an even darker turn.

The following morning, Price woke to the startling realization that her vision in her right eye had been replaced by a large blurry spot.

She was admitted to the hospital for a battery of tests and treatment with intravenous steroids, but despite this, her left eye soon developed a large blind spot.

“It was frightening,” says Price. “I had only one per cent of my vision remaining.”

Price was diagnosed with a variant of neuromyelitis optica – a rare autoimmune inflammatory disorder of the optic nerves and spinal cord that causes demyelination of nerve cells.

Several weeks later things worsened when she developed strange sensations in her legs, followed by weakness, and then total paralysis from the waist down.

After months in medical care, including in a rehabilitation facility, she was finally discharged and went to live with her sister in government housing.

Price enjoyed living with her parents on the Gold Coast, Queensland, but, despite the warm weather and fresh salty air, her health problems did not end.

Her paralysis worsened to involve her arms and she had to be admitted again to the hospital for multiple treatments including intravenous steroids, plasmapheresis and chemotherapy.

She eventually regained the use of her upper body and her vision was returning to normal however, it took seven grueling months in the hospital and at a rehabilitation facility before she was able to return home.

Her transition to living at home proved harder than expected, and Price found herself retreating to her bedroom, with little contact with the outside world.

“I felt frustrated, always staring at four walls, and feeling like I was in a prison cell,” Price says. “I came to the conclusion that if I wanted to change things, my only option was to make it happen myself.”

She was scrolling the internet, pondering her future, when she saw an ad for the Gold Coast Marathon.

“I knew instinctively that that’s what I wanted to do,” Price says. “I knew that the only way to smash a big dream is to take a path of stepping stones to get there.”

Her initial stepping stones were modest. Simply getting out of bed for 30 minutes each day, followed by short outings in her wheelchair and then advancing to rolling progressively longer distances.

Eventually she built up enough strength that, by August 2016, she was able to complete the 5K Bridge to Brisbane fun run unaided.

“When I crossed that finish line, I’ve never felt anything like the pure joy, elation and sense of pride that I felt in that moment,” says Price.

Since that day she has continued to move forward, regularly competing in distance wheelchair racing, with steadily improving times.

Her achievements have not gone unnoticed and in April 2019 Price was approached by Brisbane-based agency Synergistix Allied Health who offered to sponsor her wheelchair racing if she would trial a revolutionary device known as the Mollii Suit.

A full body synthetic outfit, similar to a wetsuit with a zipper down the front, the suit contains a detachable battery situated over the abdomen, which is connected to 58 electrodes strategically embedded to cover the arms, legs and torso.

“I can really feel the difference since I started using it,” says Price.

The concept of using electrical current as therapy is not a new one, going back for thousands of years to the ancient Egyptians, who would use electric catfish of the Nile for relief of arthritis pain.

By the mid-19th century electrical therapy was being used for a number of painful conditions, including headache, toothache and dysmenorrhea.

However, complications, including skin burns and accidental electrocution, along with the increasing availability of alternative analgesia, meant that therapeutic electrotherapy fell into temporary disfavour.

Interest began to build again in the mid-20th century with electroconvulsive therapy becoming popular for the treatment of depression.

In 1965 Canadian psychologist Ronald Melzach and British neuroscientist Patrick Wall described the gate control theory of pain, which stands to this day.

When there is stimulation of large diameter nerve fibers, say by rubbing a stubbed toe, then that impulse will help “close the gate” in the dorsal horn to painful stimuli from thin nerve fibers, thereby reducing pain transmission up the spinal cord to the brain.

Since then TENS machine usage has become widespread, with numerous clinical studies showing benefit in reducing not only acute pain, such as labour contractions, but also some forms of chronic pain including diabetic neuropathy.

The inventors of the Mollii Suit have taken the concept of the TENS machine and extended it, by applying electrode points all over the body.

“To really block out pain signals we need enough signals from many body parts to come in and take up as much space as possible in a given neural pathway,” says Sandell, the co-inventor of the suit.

In 2014 an evaluation of 117 patients using the Mollii Suit showed that every patient reported at least some degree of improvement in their condition.

A 2018 case-control study of children with spastic cerebral palsy, conducted by the Department of Children’s Rehabilitation at the Lithuanian University of Health Sciences, showed that children using the device gained improvement in gross motor function and mobility.

As with any medical treatment, it is important to consider the possibility that any benefits from the Mollii Suit may be at least partly due to the placebo effect.

However, Dr. Naji Riachi, the head of neurology and assistant dean for clinical research at the Lebanese American University Medical Centre believes there is more to the suit than just mind over matter.

“The results are even better after one month [of use],” says Riachi. “This is no placebo effect but rather a true sustained effect that will get even more pronounced when patients combine the use of Mollii with physical therapy.”

The creators of the Mollii Suit claim it is safe to use. The fabric is latex free, comprising 82% nylon and 18% spandex. The few contraindications that exist for its use include anyone with electrical implants or medical devices such as pacemakers, pumps or shunts that may be affected by magnets.

Although the Mollii Suit is relatively new on the Australian market, it has already received approval for National Disability Insurance Scheme (NDIS) funding for assistance in its rental and purchase.

“We offer our clients an initial consultation that is free of charge, so they can try the Mollii suit for themselves,” he says. “After that, through the NDIS, clients can access an hour and a half session with an occupational therapist for $195 AUD, which is fully funded.”

Métier Medical Limited holds the license to distribute the Mollii Suit throughout Australasia.

“We have had hundreds of enquiries from patients and doctors, asking about how they can get the suit,” Métier Medical administrative manager Belinda Monforte said. 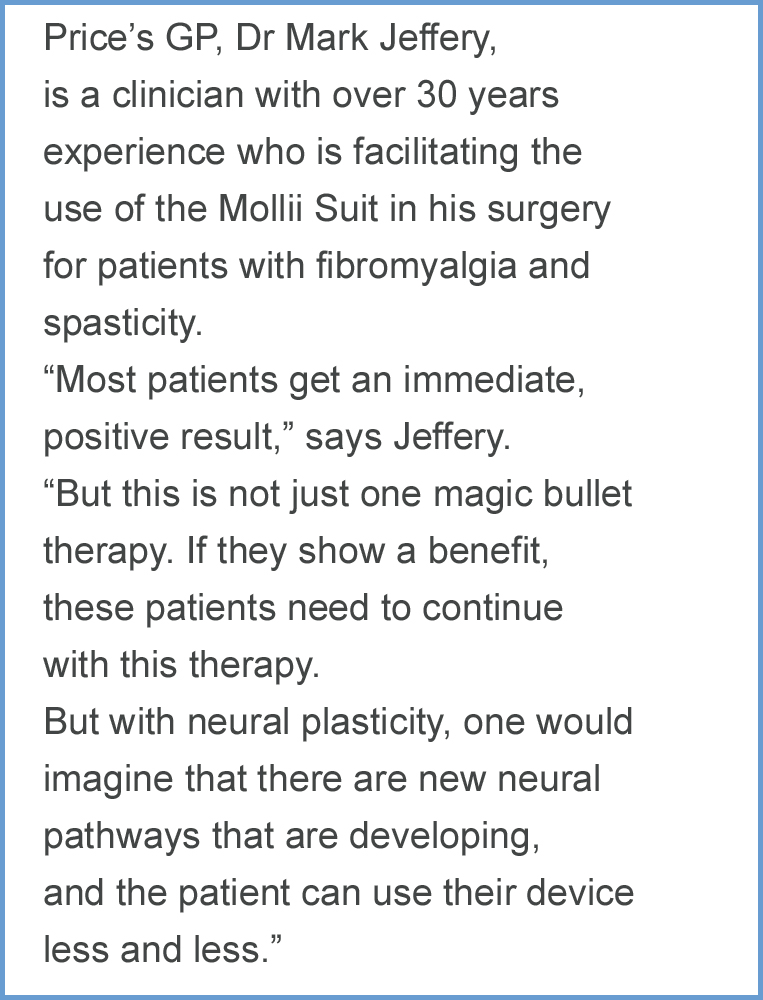 “I can’t speak highly enough about what a difference it’s made,” says Price. “The race times that I’m managing to get out of myself after having worn the suit is about a minute per kilometer faster.”

Price continues to train intensely and has her sights set on an international ranking, hoping to qualify as a wild card entry for the 2020 Tokyo Paralympics.

In the August 2019 Sunshine Coast Marathon, she achieved a personal best time of 1:17 in the 21.5-k half marathon, coming in second place in the wheelchair category.

In July 2019 Price competed in the Gold Coast Marathon, an event she had completed the previous year. This year’s event was threatened by bad weather, the sky low with rain-heavy clouds and the ocean high with a southeasterly swell.

Price looked tentative in her dark-blue spandex crop top, black leggings and black socks and as predicted, barely two minutes before the start of the race, a heavy downpour swept across the race track.

Despite the drenching the race started but things did not go according to plan for Price, having a flareup of an old tendon injury in her wrist, she had to pull out of the race halfway through the 21-kilometer mark, after struggling for one hour and forty minutes.

“It is what it is,” she said with a shrug. “At the end of the day, I got off the start line and got over the bridge. But these gloves were buggered from the start and I thought to myself that if I keep pushing it I’ll just injure my wrists even further.”

She looked down at her lap for a moment. Then she looked up at the clouds clearing over the ocean and smiled.

“I guess there will always be another race.”

For more information about Mollii, visit their website here. 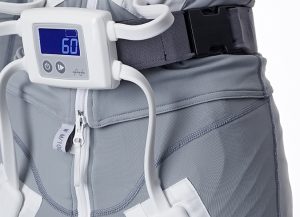