Snorkeling inside the Georgia Aquarium May 15 in Atlanta, Paralyzed Veterans of America (PVA) Northwest Chapter President and National Director Matt Mickunas had one exciting moment.

That’s when a whale shark, the largest known fish in the world, bumped into the 55-year-old Army veteran inside the 6.3 million gallon, football-field-sized Ocean Voyager exhibit.

“This was outta sight, just to come here and snorkel with a big giant whale that bumps into you,” Mickunas says. “You’re in the traffic with all the fish, and you don’t really realize it when they bump into you. I got bumped but didn’t get knocked out. As soon as I got bumped, the [dive buddy] kind of lifted me up a little bit so I wouldn’t get [hit by] this huge tail.”

Mickunas was one of 15 PVA members who participated in the Veterans Immersion Program at the Georgia Aquarium as part of a scuba dive and snorkeling/swim experience May 14-15, with help from volunteer dive buddies from the nonprofit organization LifeWaters and Arkansas-based partner nonprofit organization Water Therapy.

Mickunas, who served from 1985-2008, underwent five back operations while serving, the last one being a spinal fusion, and sustained a level L2 incomplete spinal-cord injury (SCI) about seven years ago during surgery to repair the fusion.

He says he had snorkeled before his injury, but it had been about 15 years. He wanted to fill a bucket list item by snorkeling at the aquarium as a first step to becoming a certified scuba diver.

Being in a controlled environment with staff who are trained in helping people with disabilities also helped him conquer a phobia: Due to perforated eardrums, he must be careful not to get water in his ears. Thanks to a floatation vest and special coverings that protected his ears, he could fully immerse himself.

“It was kind of weird, even though you were floating on top, and you have this vest on and can’t bring your neck up, I still felt like I was underwater,” he says. “The [dive buddy] just told me, ‘I’ll take you. I’ll guide you the whole way. Don’t you move.’ I was like, ‘I’m 6-foot-7.’ I said, ‘I’m not a small being.’ And he said, ‘No you’re not, but you’re floating on water. I can take care of you.’ And I actually felt I was under water a little bit and kind of jealous that there were people down below, that I wanted to be that one. I wanted to actually dive, so I said I’m prepared. I’m ready to go dive now.”

EXPERIENCE OF A LIFETIME

The Army veteran, who served from 1998 to 2000 and sustained an incomplete paraplegic SCI in an April 2000 parachuting accident at Fort Bragg, N.C., became a certified scuba diver in 2016 with his then-teenage son, Jonathan, and has been diving about 20 times.

All of Blake’s previous diving has taken place in lakes or rock quarries in Virginia, and his favorite is a place is a dive facility in Rawlings, Va., called Lake Phoenix Scuba Park & Family Campground.

“As long as you can relax your mind, it’s calming, it’s peaceful,” he says. “You’re kind of removed from the hectic pace that’s around you outside of the dive environment. It’s a different way of looking at the world.”

In Atlanta, Blake looked forward to getting back in the water in a unique location and taking his mind off everything else going on in his life and the world. Between family and work, he’s found it difficult to find time to scuba dive, and with his son now a student at the U.S. Military Academy at West Point, he no longer has a dive buddy.

“Obviously, being able to see so much while underwater was amazing, and quite frankly the best part of the whole dive in the aquarium was interacting with kids who were there to see the aquarium,” Blake says. “You don’t get that diving in a lake or quarry or anything like that. That made the experience all worth it.”

Blake says he would love to do the aquarium dive on a regular basis.

“Being underneath the shark as the shark is constantly circling overhead is kind of awe-inspiring to see that,” he says. “And then when I saw him from outside the water, he’s big, but you don’t really appreciate it until you’re underneath him and you realize how incredible that is. It was an experience of a lifetime. I got the impression they couldn’t care less that we were there. I literally had one of the smaller fish hit right off the side of my mask, so they clearly were not bothered by us being in the aquarium at all.”

He says being in a small group underwater also reinforces the camaraderie experienced on land.

“You really have to lean on and trust your buddy when you’re in the water,” Blake says.

Those dive buddies from the nonprofit LifeWaters and the aquarium’s Veterans Immersion Program team work hard to make sure veterans are safe and enjoy their experience.

Charley Wright, MS, CTRS, ATP, recreation therapist/adaptive scuba instructor for the Spinal Cord Injury/Disease Unit at the St. Louis Department of Veterans Affairs Medical Center and LifeWaters’ founder, says he tries to address people’s specific needs beforehand so he can have the correct team in place to support the veterans above and below water. But in general, there isn’t any special diving equipment needed for people with SCI.

“Sometimes we may have something that’s hooked differently,” Wright says. “If they’re stronger on one side than the other, we can switch the equipment, so it complements their stronger side.”

LifeWaters’ dive buddies receive certification from Scuba Diving International’s (SDI) internationally recognized Scubility program. Buddies must be advanced divers or rescue divers with at least 40 dives before they can sit for Scubility training. They then receive a minimum of 30 to 40 hours of training in assisting people with various disabilities on land, in a pool and in open water.

Started in 2008 by recreational and aquatic therapist Susan Oglesby, the regular program takes place every Wednesday.

“Knowing the therapeutic nature of being in the water with these amazing animals, she started the program, bringing veterans in for various reasons, to help with PTSD [post-traumatic stress disorder] and also physical disabilities that they have,” says Adam Rosbury, manager of the Military Salute Program at the Georgia Aquarium.

The aquarium’s dive team is trained through the Handicapped Scuba Association and the Rebreather Association of International Divers’ adaptive diving program. The program takes at least 16 veterans diving each week for about 30 minutes in both the Ocean Voyager gallery and the new shark exhibit, called Sharks! Predators of the Deep.

Veterans who want to scuba dive at the Georgia Aquarium need an open water scuba certification, but no experience is necessary for the swim/snorkel. 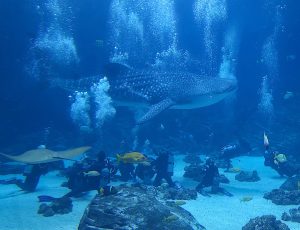