Wheelchairs and other types of technology for people with disabilities have come a long way in the last 25 years.

From improvements in wheelchair cushions to high-tech robotics, many of these advancements are thanks, in part, to researchers from the University of Pittsburgh’s Human Engineering Research Laboratories (HERL), which celebrates its 25th anniversary this year.

HERL’s primary mission is to improve the lives of veterans and other people with disabilities through advanced engineering in clinical research and medical rehabilitation.

“Our goal, our vision is to create a world where everyone can participate fully in society with minimal barriers,” says HERL founder and director, Rory Cooper, PhD, who was an Army sergeant when he sustained a T7-8 spinal-cord injury (SCI) in a 1980 bicycling accident.

Since its founding in January 1994, HERL has been at the forefront of science that has real-world applications and affects the lives of people with SCI and other mobility impairments, as well as their health care providers, on a daily basis.

Just like the adaptive technology its researchers have helped develop, HERL itself has come a long way since its modest beginnings in an old, refurbished locker room in the basement of the former Highland Drive campus of the Department of Veterans Affairs (VA) hospital in Pittsburgh.

Cooper has been the driving force behind HERL since he was recruited by the VA Pittsburgh Healthcare System and Pitt to leave his position as associate professor and director of the rehabilitation engineering program at California State University-Sacramento to start HERL.

Eventually, they secured VA, National Institutes of Health and other grants and brought in more faculty and graduate students. Then in 1999, they were certified for the first time as a VA Center of Excellence, which came with a $7.5 million grant. 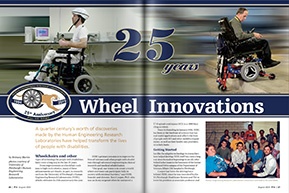